Were this particular production of I Capuleti e i Montecchi an updated, modern production, I could imagine Romeo making his first entrance on this little gem parked below our window tonight: 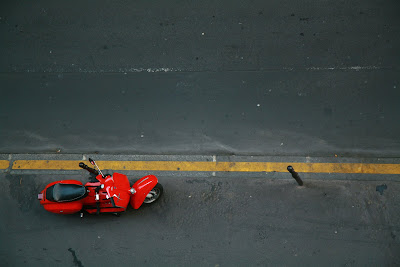 However, it is NOT an updated production so Romeo saunters on to meet the imposing legion of Capulets on his own two feet in period costume, puffy pants and all.

Last night we gave our final rehearsal to a packed house at the Paris Opéra. It’s a strange thing that happens in every theater now – we have one last rehearsal to get everything lined up and ready for the opening night, but we have to do it in front of a full house, so essentially it is our “opening night”. It can feel a bit strange knowing that we are giving “a performance” for free, and while singers fall onto different sides of the debate about whether that is fair or not, I for one usually welcome the chance to feel out a role (especially a new one!) in front of a crowd, for as I’ve written before, performing in front of people changes every dynamic of the evening: adrenalin flows in a different ratio, energy is bounced around and traded over the footlights, and the real risk taking begins! For me, it’s a good thing to test out those added elements before the “real” prima – not to mention, most of the folks attending are donors (thank you!), friends of the opera, families of the orchestra and crew, and the lucky few who “know someone”.

Last night I sensed immediately that it would be an exciting night, and by all accounts that made their way to me, it most definitely was. I think it was the case of bel canto music really weaving it’s magic on the performers (allowing us to trust the simplicity of the lines and emotion), and on the audience – for the cavernous Bastille was pin-drop-quiet all night. EXCEPT, ah yes, except for what I took to be gentleman who found perhaps, the all-time worst time to let loose on a resounding sneeze-type explosion that rang through the would-be rafters: in the most hushed tones, Roméo and Giulietta say their final, eternal goodbyes, and there is a most precious rest in the music before Giuletta QUIETLY declares that Roméo has died …

“Aaah-$%&*$%^#(@*#$%” Only it wasn’t really a sneeze – it was one of those shattering sort of shout-sneezes. The kind that makes you feel someone has just suffered the fright of their life and may not survive to tell about it.

God bless him, I’m sure he couldn’t help it – but wow, the timing was deftly cinematic!

Giuletta promptly followed that with her own shattering “O Dio”, and followed Roméo to his eternal fate.

In what I took to be a testament to the impact of the moment, oddly, it wasn’t that disrupting all things considered.

So it was my very first complete run of the role – without stopping, in costume, and in front of an enthusiastic public. I’m completely head over heels in love with this guy – for his youth, his exuberance, his passion, his failed but heartfelt attempts to bridge the enormous gulf of warring factions, his pleas, his heartbreak, his loyalty, his PURE LOVE for Giuletta, and finally, for his tragic, inevitable fate.

I feel as if I’m stepping into big shoes with this role, but the sense of honor and privilege that accompanies those shoes fills me with TREMENDOUS excitement and prompts me to give it all that I have – and I simply cannot wait. I also couldn’t think of a better cast, crew, or theater in which to debut this role – this is one of those shows where all the elements are working in the best manner to produce a REAL SHOW: no extraneous nonsense or egos or distractions – and in a very relaxed and positive atmosphere so we can just enjoy bringing this all to life. It’s beautiful.

Although, I have to say, I wouldn’t HATE having to drive that Vespa…