I once wondered out-loud here in my blogging world (or should that by ‘typed’ out loud?), what listeners would think if they knew what was going on in the minds of performers at any given moment during a performance; the mental cacophony would challenge even the most atonal of 21st Century composers!! But last night the backstage area buzzed and bustled with intrigue and exceptional happenings, making for a challenging, “I’m glad this one is over” performance!

First up: the weather change: a very stubborn and insistent northern wind took up camp in Geneva yesterday, playing havoc with vocal cords, temperaments, and over-all mood. It was the kind of blustery, gray day straight out of Winnie the Pooh’s playbook that seemed intent on squelching all energy, trying in vain to seduce you to remain under the covers wasting the day away, eating junk food — the furthest possible thing from princes, betrayals, and da capo arias. 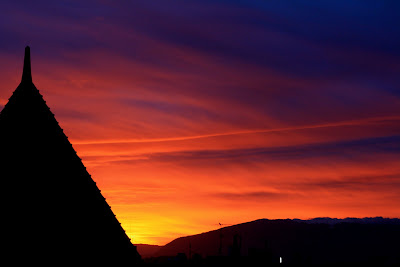 Next up: a mini-cancellation. Sadly one of our singers had been fighting a cold since the opening night (although no one listening in would have been privy to that annoying obstacle!), and during our second performance, the cold won out in the third act, claiming victory over the singer’s vocal cords. A quick visit to the doctor confirmed the assessment that the prudent decision would be not to sing the third performance in order to be back in the game for the rest of the shows. (No singer EVER likes to be in this position – but we are all susceptible at any time, any where.) The solution for this 3rd performance was to have our singer deliver the recitatives, while an imported singer (from Magic Flute, currently in rehearsals) sang the role from the stage. That singer had 1 day to learn the role. And so here you have the original singer ‘walking the part’ to a voice which is not her own, the substitute essentially sight-reading and trying to fit in with a staging/setting she has never seen before, an orchestra accompanying a new singer with no rehearsal, and an audience seamlessly processing everything as a finished performance. (Perhaps the impromptu nature of this staging was actually enhanced by these improvisations?) For the record: BRAVA to both singers for pulling off a very difficult situation with incredible bravura and committment!

Thirdly: a pain the back! During the second intermission I heard calls over the PA for doctors, nurses, staff, you-name-it, and immediately alarm bells go off. Another of our singers had been fighting terrible back pain over the past few days, (undoubtedly made worse by Old Man Winter) and it managed to hit a crescendo during the 2nd Act, so the prospect of singing another act was apparently coming into question. Evidently the brilliant Swiss doctors worked their magic, because the 3rd Act went off without a hitch, and certainly the audience had not a clue that anything was amiss. Again – what a pro, singing through pain like that. BRAVA!

Finally, a sticky topic, which I probably should avoid altogether, but like a grotesque, firey car wreck, I just can’t avoid it: If someone asks me, “Do you read your reviews?”, I’m 100% honest and respond, “Why yes, I do.” But the next thing out of my mouth is that I take EACH and EVERY ONE of them with a LARGE grain of salt. If they are good, I will use them liberally and purposefully, for it is simply part of the business. If they are bad, I’ll *try* and honestly assess if I think there is a grain of truth in it, or at least attempt to understand what the critic’s point of view was, hoping there is something constructive at the heart of it from which I can learn.

But in the end, it is simply and uniquely ONE person’s point of view, and the reality is that in no way, shape or form do I sing for the critics — their tickets are free, after all. I sing for the folks who fork out the cold, hard cash. Period. However, it would be naive to think that reviews, whether written well or not, whether educated and informative or not, do not still hold a place of importance in our business. (And let it be said, I’m always grateful for the kind word – no mistake about it!) Anyone following our performances of “Ariodante” here in Geneva will discover that we have not received stellar reviews for this production. (I’ll reserve my opinon on whether I agree with their point of view or not for my unauthorized biography when I’m long gone from the stage.) But right or wrong,I can feel the effect of those reviews on the cast, and I think, even on the audience, for overall, I sense a feeling of disconnect from the public. (In fairness, even the Genevoise public will admit that perhaps they are not the most likely audience to break into a frenzied ovation at the drop of a hat – but they are an educated, appreciative bunch of whom I have grown very fond.) If the cast senses that the show will not be a HUGE, ROUSING, OFF-THE-CHARTS success at the end of the evening, it’s a bit of a trial to find the energy to zip up your costume and emerge from the wings ready to dazzle the audience. 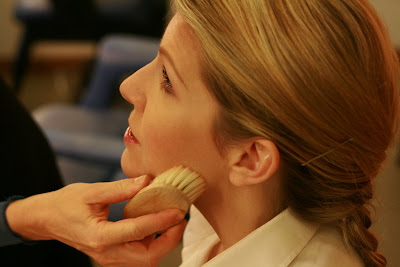 However, here at the bottom line there is indeed great news: the music is the unquestionable winner in this, and THAT is no small victory! We have a very special cast in this show from veterans to newbies, and even when the morale-meter has wavered a bit on the low side, we come together, sing this music with great respect and enjoyment, and play the staging for all it is worth, relishing the interactions on stage and the glorious, challenging, profound music that was written nearly 250 years ago. Any chance to see or hear “Ariodante” is not one to be missed, and I think having weathered a tough, up-hill performance like last night will serve to lift us all up for The Big Broadcast tomorrow, and we will have an outstanding remaining three performances.

In the end, little hiccups such as these simply serve to make my job all the more interesting, and make me smile at the end of the night thinking, “The audience had no idea!”