I’m making it! I can see the light at the end of the tunnel growing a touch brighter with each passing Germanic measure! I’m actually becoming nearly convinced that I may just get through this first German role! Never mind the sensation that German is spilling out of my head at an ungainly rate; never mind that I’m barely staying afloat; never mind that my retention rate seems to be that of a 5 year old the day after striking Halloween Gold! I AM managing to get the German to come out in a reasonably intelligible, coherent manner; I AM staying (just) at the surface of the water, even if I’m treading like crazy underneath; and finally things are sticking in my head a bit longer than in 10-minute stretches while we run a scene. Hallelujah, someone call the press corps!! Wait, don’t’ call just yet! Opening is still 2 1/2 weeks away! 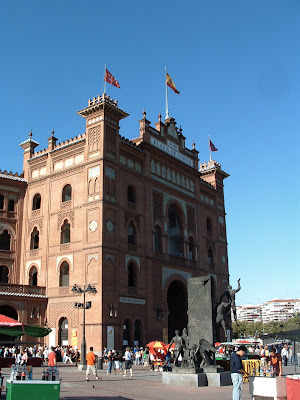 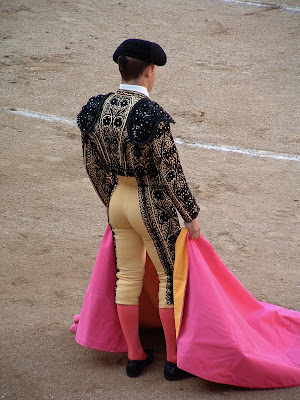 (All I ever need to see, in order to understand Carmen!)

What am I jabbering on about? The Composer. Der Komponist: that lively, manic-depressive, heart-on-his-sleeve character in Strauss’s MASTERPIECE, Ariadne auf Naxos. First, let’s do set aside any pretense that I will be writing the following journal entry in the manner of a holier-than-thou Operatic Diva: the untouchable, the infallible, the one who walks on water. Anyone who knows me, knows that this behavior is just not my cup of tea. Anyone who is looking for his or her “Diva Worship Fix” can start looking elsewhere for the moment. (If I do my job well enough, there just might be enough interest generated simply on the merits of the performance alone!) Do stay tuned!

Enough preambles. This role has scared me to death, in operatic terms mind you – not literally. This is my first stab at a German leading role, discounting my professional debut in Houston as the SLAVE in Salome – the ‘if you blink, you missed it’ role. I’ve found that one’s first outing in such categories (i.e., your first Rossini role, your first French role, etc) holds the possibility to dictate how you will feel about future such roles throughout your career. My first Cenerentola was a rather big success, and ever since, I’ve looked forward to singing it with bated breath each time. I didn’t want to come into my first, of what I hope will be many, Strauss roles and not soar with it, in true Straussian fashion. But German is QUITE a different animal than Italian or French, and I must admit, has not held much interest to me before. I’ve much preferred to stay immersed in the comfortable, familiar surroundings of Italian and French, all the while thinking I’d leave the German to “them”.

No more! It’s sink or swim time. And I’m loving the challenge! I turned around to the veteran cast yesterday after a musical rehearsal, and just said, “This is a really brilliant score”, and they looked at me, in all sincerity, as if to say, “where the hell have you been?” It’s not that I didn’t know it was brilliant – I know it’s a masterpiece. But knowing it and discovering it for yourself is quite a different story. I’m still naïve enough to delight in the opening of a new score, pouring through it, and allowing the portal to open, slowly and majestically before my eyes. All summer, as I was sweating the impending calamity, all my colleagues were saying, “You’ll be fine, you’ll LOVE it, you’re perfect for the role!” And while I appreciated the support more than I can say, it’s still not the same as digging in and finding the center in your own way and on your own terms. This is the only way I can learn a role anymore. Perhaps it’s more time consuming, but I don’t want someone to spoon-feed it to me. I don’t want to be a slave to a recording to learn the in’s and out’s of a character. I don’t want to rely on anyone else’s interpretation. I need to find it through my own work.

Happily, I can report that the “Strauss Click”, for lack of a better term, happened this week. During the entire first week of our staging, I would do a scene, stumble, fall, collapse, and grind the entire process to a halt while trying to get through the phrase, “Ich habe mich über einen frechen Lakaien erzürnt, da ist sie mir aufgeblitzt.” (This is a phrase, by the way, that needs to trip off the tongue with Crosby-Hope-like panache!) Even for a German, I do believe, it can be tricky. Use your imagination!Speaking of family, I haven’t only been singing this summer (as the photos on this site suggest!)

However, I’ve been working my “heilige” tail off, and it’s finally starting to pay dividends, because now my mind can get out of the panic mode of “WHAT WORD COMES NEXT?”, and start concentrating on lovely, meaningful things such as the character, listening, the scene in general, and the beautiful, naïve, innocent, raw, sincere and earnest sentiments that this young man professes at every given opportunity. He is a joy to discover, as is this piece of music; and in case you’re wondering, my appetite is most definitely whetted for that other masterpiece on the horizon – Herr Octavian! 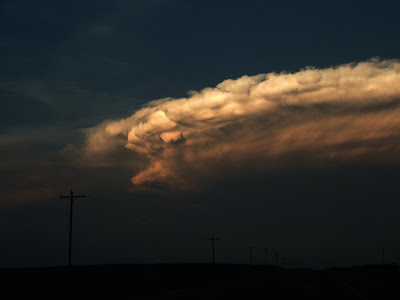 I’m enclosing a beautiful photo I took on the trek back from Santa Fe to Kansas City, going through the panhandle of Texas and Oklahoma, through historic cities, like Dodge City, and seeing the most vast skies imaginable. Sadly, western Kansas gets a bad rap, but I think that’s because people are too busy seeing what’s not there (there are no mountains, no ocean, this is obvious.) But if they would stop to actually look and see what majestically unfolds in front of them, it truly is a natural wonder, for as far as you can see, the world munificently opens to you a sky and land bigger and more enveloping than your imagination can envision. It is something to behold.

I’m enjoying these memories as well while I’m reading the novel by Truman Capote, “In Cold Blood”. It’s both horrifically chilling and terribly captivating. One element being how Capote, this arrogant animal of the high fashion and erudite literary world of New York, views and describes this other universe of small town gossip and molasses like pacing: as different from his world as could possibly be. It’s a wonderful read, and a welcome distraction from ich’s and sie’s!