I love this guy. He sits atop the Town Hall in the amazing “Grand Place” in the heart of Brussels. From the ground he’s gnat-sized, but with the welcome help of a big zoom lens, he begins to come to life. It would seem to me that he could launch into a rather heroic aria of fury and vengeance at any moment! Also on the square are astonishing houses built into each other with marble and bronze and swimming in statues. It puts to rest some of my fears that the 21st century is single-handedly inventing decadence; no, alas – it has been around for ages. One of these homes boasts a construction date of “1699”. That’s three years before Handel’s father insisted he entered law school, which he begrudgingly, obediantly did. Thank goodness that didn’t last. But all around me is inspiration and atmosphere encouraging me to stay strong, healthy and motivated going into my last day of this project – perhaps, staying rested is the main catch, because inspiration certainly thrives in abundance here.

Part of the trick in having a successful recording session is in the planning: what numbers to attack first, which to save for the end of the day when all participants are exhausted, where to put the pieces that will require the maximum concentration (well, ok, that’s ALL of these bad-boys, so take your pick!), and what about the fireworks? Are they best launched into before lunch when energy is still high, or just after lunch when people have rested a bit and may just arrive fresh and invigorated? I’ve found that just after the morning coffee break seems to be the most promising – we’ve all had our shots of caffeine, and the afternoon temptation to slip into “siesta” mode is handily avoided!

Yesterday I opted to start with two of the more cantibile, or languid, legato pieces. First up was “Dolce Riposo”, Medea’s aria from Teseo. It is pure, lyric bliss. It’s one of Handel’s little gems which he gifted so generously to this world, and it’s a rare moment of quiet serenity for this tortured creature, Medea. She speaks from an emotional distance of something which cruelly eludes her, and so Handel paints her line in long, wilting strokes of contained aching, with a quiet recognition of a fate which does not belong to her. My heart weeps for her. 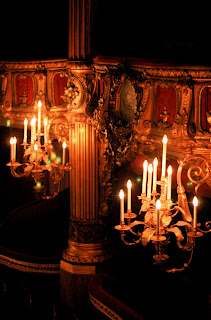 We then stayed in the same atmosphere to address the suicidal aria of Admeto, which follows a RAGING accompanied recitative. I knew I wanted to come back to this recit later in the day – in fact, as the very last undertaking so I could afford to hold nothing back – no worrying about ‘saving’ some energy or voice for another aria. No – I wanted total abandon. But more on that in a moment: this work requires a bit of suspended energy, for this opening aria (it’s how the opera actually starts) finds the main character praying for his eyes to close once and for all, in all eternity – for only there he will surely find peace.

I’ll selfishly digress for just one moment to explain why this suffering seems to touch my soul so vividly – first of all, I think Handel’s purity and immediacy of line and harmony possess a quality that not only pierces the heart, but enters it without mercy. When he sculpts these aching lines, driving the heartbeat of the base line relentlessly underneath it, there is only one place for it to go – and that is deeply into the heart. I believe that the heart relishes to be “exercised” in this way – for I think if we can access such depth through music, it teaches itself that it’s ok to ‘go there’. It is our doorway to those things we fight so desperately (and uselessly) to shut down.

I can also quote Placido Domingo: I read somewhere recently in an interview that was centered around his interpretation of “Otello” (which I MIRACULOUSLY saw in Milan – his return performance after having had to leave mid-show a few nights earlier – he was, in a word, miraculous.) Again, I’m digressing…..so they asked him about all the suffering his characters go through and how he handles it, and he responded something along the lines of how wonderful it is to suffer on stage. I’ll second that. There is something cleansing and delicious about it – probably because it is essentially removed from “me”, but at the same time, I am living it – I’m feeling the heartbreak, the desolation, my pulse races, my muscles clench – good gracious, especially when Handel is the author! And then? The cleansing comes. And I do feel cleansed after experiencing this music. Maybe it’s a bit dishonest to arrive here courtesy of fictional characters, but I don’t think so – I think it’s a gift.

So – where was I? Admeto: suicidal. Yes – that’s where we left off. Poor guy – that’s a VERY dark place to START a marathon Handel opera! With one stark chord, he is awakened from yet another torturous nightmare where he is relentlessly pursued in torment and near possession plunging him into the depths of hell and despair. The “tempo” (or in this case, “emotional”) markings whip violently between “con stupore” to “adagio” to “agitato” back to “adagio” to “furioso” and ending in a spent, desolate “adagio, e piano”. Then the only thing left to do is pray for relief – the shutting of his eyes for all eternity. I prayed for death in the morning and dealt with the “horrible larvae” (“orride larve”) as a parting gesture at the end of the day!

LUNCH BREAK! Still feeling guilty over my malo-cake binge, I felt in serious need of real nutrition. I happened down a street that consists ENTIRELY of restaurants. I shall henceforth refer to it as the Modern Garden of Eden. A chalkboard with an ‘entrecote’ special jumped out at me – IRON was called for, and steak it was to be! I sat with a beautiful book, in the middle of this beautiful street, beautiful weather – I rested my voice, escaped a bit in the story, and savored each bite of the steak. I’m sure the shallot butter on top helped it go down more easily, but it was just what my body needed.

Back to the theater, and our trumpet arrived! THIS may be my very favorite trick, or let’s say “device” of Handel: just when you can’t possibly take it any more, he pulls out his secret weapon – HORNS!!! TRUMPETS!!! BRASS!!! Tonally, there is nothing like it. It’s the stroke of genius that elevates Alcina, for example – after nearly 30 da capo arias, just as the evening is waning, and BAM! “Sta nell’ircana” arrives on the scene with brass, and the entire theater jumpstarts to life. Well, we didn’t record that gem, but another one a bit more obscure, but WOW did it feel good. I think it’s just what the disc needs for that little (or big!) jolt. I was struck, once again, how a stranger can arrive on the scene and with no rehearsal, we can all join in the making of music. Thirds rolled out with little effort, phrasing married without any hint of a prenup, and within the hour, he disappeared again – job accomplished. Life is so funny – it just flits by.

So we have one more day – Tuesday, in which to finish the rest of the pieces. We’ve done all the big scenes, so I think we’re in good shape. A free day to rest up a bit more, and then before I know it, I’ll be on a plane – all of this behind me. Then I have a week to think about “wherefore art thou, Romeo???” 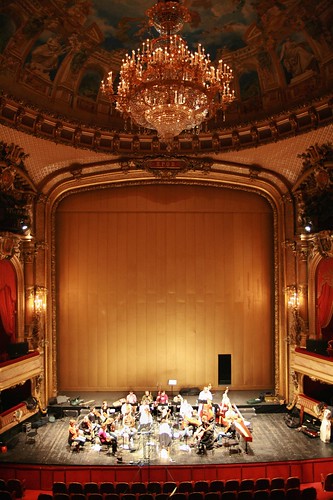