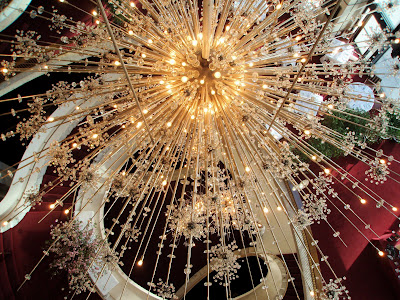 Allow me to take you back to a day here in New York City, just over a month ago: the sky was pelting the downtrodden residents of the Big Apple with freezing rain, mercilessly reminding us that winter was to have the final word just then, and my cell phone rang. Now, in the apartment I’m currently renting, the best cell phone reception I can hope for is the occasional ‘single bar’ on my phone, which simply teases me into thinking that I may actually be able to carry on a live conversation; but mind you, it’s only a tease. In some ways, it’s a welcome relief. But not on this blustery winter day: as I attempt to beat the cell phone gods at their own game, I boldly answer, “Hello? HELLO!” and I catch just enough of the dulcet tones of this caller’s voice to hear:

I’m no rocket scientist. But it took me about .4 seconds flat to open my tiny window, stick my head into the pelting, freezing rain and say, “Ms. Sills? What? I’m sorry, WHO IS THIS?”

It was the smile in her voice that gave her away. I would have recognized it anywhere.

So fast forward through the jagged rain, the beating heart, the dry mouth, and the gaping jaw, and I managed to hear that she was presenting me with her award for this year. THE Beverly Sills award. This was huge. That conversation will last much longer in my memory than the terrible weather, for she was quite generous in sharing her reasons for choosing me as the winner for 2007, which I won’t bore you with here. Suffice it to say, hearing sincere compliments from the legendary, groundbreaking artist, Ms. Sills, is more valuable than any amount of money put on a check. 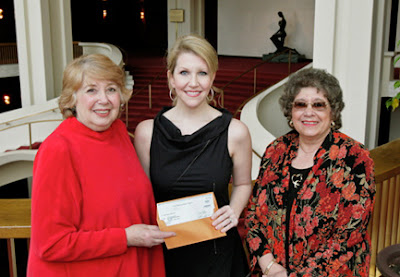 (With Beverly Sills, Agnes Varis, and ‘the check’)

Which leads to me to the not-at-all-small amount of money written on the check, which happened to be donated by one legendary lady in her own right, Agnes Varis. She was concerned a year ago that Beverly Sills secure the kind of lasting recognition deserving of her legacy, and so she gave the Metropolitan Opera a cool million dollars in her fellow Brooklyn native’s name, designating it to be for promising, young American singers, and insuring many years of such grants. You see, Beverly wanted to go to France in the early stages of her career to study French, but never had the means – it’s not surprising that she doesn’t want that to happen to other young singers.

Can I find the words to say how honored I am? How overwhelmed? No, not really. On so very many levels it astounds me. The only thing I want to say, apart from declaring the abundant gratitude I feel, is to convey what a privilege it is to be linked to these two Brooklyn Ladies (or perhaps two ‘firecrackers’ is a better description?) who have single-handedly accomplished so much for the past, present and future of opera in America. I take this award as a true charge to fulfill the promise and potential they see in me. I wouldn’t want to let either of them down.

But in the meantime, I’m back in “Seville”, and lo and behold, there is magic to report! I knew April 26 would be an electric night, however I wasn’t at all prepared for the sheer enormity of it. My dear friend, Lawrence Brownlee, was scheduled to make his Metropolitan Opera Debut, and I was afforded the privilege of sharing the stage with him on that auspicious night. I knew he was ready, and I knew the MET audience would sit in that theater and not know what hit them. 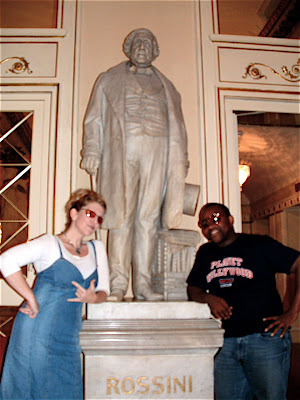 (Larry and I in the lobby of the Teatro alla Scala in front of a statue to the one and only Rossini, July 2005)

However, I wasn’t quite ready! As often happens when one gets a bit run-down, the minute those dormant bugs sense an opportunity, they pounce. And sure enough, a good old-fashioned infection took up residence in my throat.

To this day, I have yet to cancel a performance because of illness.

[Thank you. However, if you didn’t actually touch wood, please do so now! THANK YOU!!!]

In fact, I hadn’t seen an ENT for nearly 3 years! But I knew immediately that this had the potential to be a whopper! As the days passed and gallons of orange juice and zinc lozenges were ingested, I was on the mend; but I wasn’t at all sure how singing Rosina on the stage of the MET on a less than healthy throat would fare; so I put the MET staff on alert the day of the big debut, and they were quite wonderful and accommodating waiting for news of my vocal state. (I hereby nominate Sissy Strauss for canonization.) I had a major decision to make. On the doctor’s assurance that there was relatively little-to-no risk, I decided to sing. But I wanted an announcement made. I’ve never done that before, and truth be told, I still have mixed emotions about it, but the determining factor for me was the fact that because I had never sung ill before, I didn’t know what might happen – there was a big unknown walking out onto the stage. My thought was that IF something started to derail, the audience’s enjoyment of the show would not suffer much, if they knew ahead of time what the cause would be. So we did the announcement, I sang fine, and the audience probably scratched their heads wondering what the big deal was!

However, the “big deal” was about to make his debut! I knew from the opening bars that both he and Russell Braun, the new-to-this-production Figaro, would be on form. No worries. And as the show progressed it had a new, spontaneous vitality that was enormously fun to play. The audience was having a blast. However, anyone with a semi-working knowledge of the opera world was waiting for the BIG moment for the tenor – the famous ending aria that is so rarely performed, “Cessa di piú resistere”. How would this not-so-tall, African-American, not-Latin tenor stack up?

It was perfection. He reduced me to both a fountain of tears and a torrent of giggles at the same time. I’ve never felt such emotion for another singer on the stage before in my life, and I can’t imagine that there will be too many more moments like it in my career. Larry and I were both winners in the now defunct Stewart Awards back in 1998. I’ve seen his career go through many ‘downs’ at the start, to now what seems like a string of never-ending ‘ups’. We shared the stage at La Scala in “Cenerentola”, and I saw the hungry Milanese applaud him vociferously. I have only an inkling of some of the struggles he has faced, and we have tackled many conversations about the inherent difficulties of race or stature in this business (and in the world): he certainly is not the only talented singer to face an uphill battle. However, I have NEVER ONCE known him to make an excuse for himself, or to complain that he is all-too-often compared to other singers, or to agonize over a lost chance or perceived unfairness. I have ONLY known him take every comment or occurrence and ask, “What do I need to learn from this?” “How can I be better?” “How will this make me grow?” That is a lesson for not only every working singer, but for every human being as well, and is one reason I count Larry as a true inspiration. 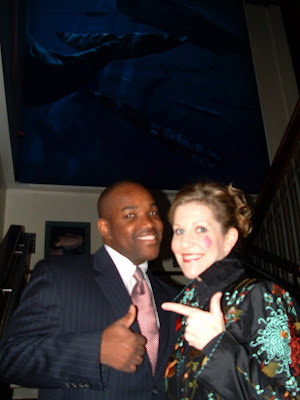 (With Larry after the premiere of “La Cenerentola” in Houston, Jan 2007)

So when he took center stage that night, in front of a sold-out MET audience, but more importantly in front of, and dare I say in tribute to, his Mother and Father, he was saying so very many things for so very many people. This was HIS moment to shine. It was his family’s moment to shine. It was a true thing of beauty to watch a person step into the light, take their moment, share it with so many loved ones, and celebrate all that is beautiful in this world. How lucky I was to share in it.

Every single artist has what appear to be insuperable obstacles on their journey to achieve their dream. Let’s be honest: every single human being has them in their own unique way and time. Sometimes, an example is given to us, so that we may witness first hand, may concretely observe, that it IS, in fact, POSSIBLE to overcome those challenges that seem insurmountable. And not only to just overcome them, but to rip them to shreds in the process! I’m so proud to know someone who has the courage to do just that, and that shares it so freely with the rest of us.

I’m reminded of one of the most inspirational quotes I’ve ever come across. Please forgive me, because it’s been credited to both Nelson Mandela and Marianne Williamson, and I’m not at all sure who is correctly attributed. With due respect to both of them, I’m not sure it ultimately matters:

“Our deepest fear is not that we are inadequate.
Our deepest fear is that we are powerful beyond measure.
It is our light, not our darkness that most frightens us.
We ask ourselves,
‘Who am I to be brilliant, gorgeous, talented, fabulous?’
Actually, who are you not to be?
You are a child of God.
Your playing small does not serve the world.
There is nothing enlightened about shrinking
so that other people won’t feel insecure around you.
We are all meant to shine, as children do.
We were born to make manifest the glory of God that is within us.
It’s not just in some of us; it’s in everyone.
And as we let our own light shine,
we unconsciously give other people permission to do the same.
As we are liberated from our own fear,
our presence automatically liberates others.”