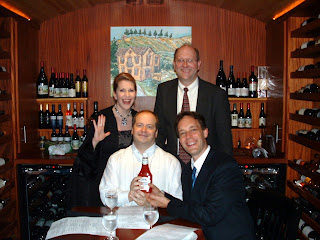 Chamber music: is there anything more satisfying to perform? (Well, I suppose if I’m really honest I could ask the same question about singing Handel or Mozart, but I’m in Chamber Music Heaven right now, so I’ll bask in this moment for the time being!) Last night I had the immense pleasure of singing two completely different works for the first time, and it was an evening that will stay with me for a long time. I’m here to sing with the St. Paul Chamber Orchestra, and to make music with such esteemed players really is a joy. It’s the interplay that you can achieve with a chamber group that I just adore: in opera, we stand on the stage, towering (or so it seems) high above the orchestra, which dwells in the depths of the orchestra ‘pit’, and it can feel nearly impossible to achieve a sense of unity. Sadly, I find that often an atmosphere of “us vs. them” seems to emerge, which makes it hard to feel as though you’re working toward a higher cause. However, with a group of 25 players, a conductor and the singer — we all stand on the same level, play for the same purpose, (we can actually achieve eye contact with each other), so the sense of creating a piece together can bring a real excitement. When you have players as generous as in this group, the energy can be electric.

The other electricity of the evening was propelled by the debut of Jake Heggie’s new orchestrated version of his “The Deepest Desire” song cycle. He originally wrote this piece for piano, flute and mezzo, and the St. Paul Orchestra commissioned a new orchestration of the piece (at conductor Patrick Summers suggestion). The result was simply out of this world. I’ve performed the cycle of number of times in recital and have actually recorded the piano version (for release later in the summer!), so I know the work well — but let me tell you, singing it with an orchestra is a completely different force! Jake has orchestrated it so colorfully and hauntingly and thrillingly (what an atmosphere the alto flute can create!), that the result seemed to hold the audience in a state of rapture. I wish I could describe perfectly the feeling of breathing life into a work for the first time. This is a piece that had never been heard before; we were charged with bringing it to life for the very first time — creating these words and phrases and music that had never been heard before, and it is such an exhilarating feeling when you know it is reaching and touching the audience in front of you. This is the very reason I do what I do.

I’m certain that this is destined to be a very significant new work for singers and orchestras to perform — it’s American, poignant, beautiful, memorable, and uplifting. Thank you to Patrick for championing it, to Jake for writing it, to James Kortz, the orchestra’s librarian, for commissioning this piece in honor of his wife, Catherine Shipman Kortz, and finally, to Sr. Helen Prejean for sharing her moving, inspiring words with Jake — the foundation of this entire piece.

The second piece, I was singing for the first time was Rossini’s cantata “Giovanna d’Arco”. Someone help me out here, as we were trying to surmise over dinner if this has been performed — in it’s orchestral version — in the United States before. We’re not sure at all, but we may have just given the North American Premiere of this monster!! Like Jake’s cycle, Rossini composed this work for piano and voice, and upon Teresa Berganza’s request, the Rossini Festival in Pesaro commissioned an orchestration of it back in 1989. It is a 16 minute ‘mini-opera’, and it is one of the most thrilling things I’ve ever sung. (But I can understand why it’s not sung too often — it is also one of the most difficult things I’ve ever undertaken!) I came off stage and was just shaking with adrenalin and energy, and very nearly ready to go back and sing through it all again!

But once again, I had the sense, since it is so rarely performed, that people were experiencing it for the first time, and truly discovering this piece along with myself and the orchestra. This is the sensation I aim to achieve each time I perform — especially if it’s the umpteenth performance of Rosina or Cenerentola or Cherubino: I’m certain that there will be at least one person in our audience that has never before experienced the delight of discovering the brilliance of these works, and I am the person who has been charged to introduce them to these masterpieces. I took my niece, Kelsey, to see Le Nozze di Figaro in Kansas City a few weeks ago. I purposefully didn’t tell her a word of the plot, and was curious to see if she would follow it, ‘get it’, or even enjoy it. I had forgotten how surprising it is to watch the Count discover Cherubino in the chair, to see how Figaro squirms his way (just barely) out of all his jams, and to feel the deep, deep pain the Countess encounters in scene after scene — we take it for granted far too often that we all know ‘how it goes’. This is what singing new works has taught me — I don’t ever want to take one note for granted.

The final thought about this great weekend (which isn’t over yet, we do concerts tonight and tomorrow), is what a JOY it is to make music with friends. Both Patrick and Jake are men who are in music because they believe deeply in the power of it’s language and because they believe deeply in the human spirit’s NEED for it. To be a part of a project with people like that is a rare, precious gift!

Truth be told, however, as much as I love these concerts, I’ll be very happy to get back home, because I have 10 more days free to finish painting my loft!! My time at home is so limited that I become a bit like Martha Stewart on steroids and aim to accomplish as many projects as possible, (in amongst seeing family and friends, studying, catching up on my Royals, and telling myself I should rest a bit)! So far, I’ve gone through 5 different colors of paint (finally settling on orange and red…), and WAY too much blue painter’s tape. It’s been heavenly! I am sure that after all the paint fumes I’ll be more than ready to get back to work and spend the summer with Rossini in Italy! Fra poco… 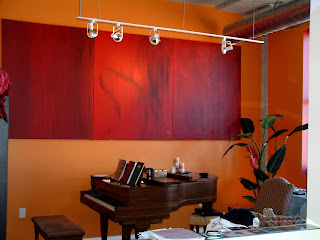 (Photos: With Patrick Summers, Jake Heggie, James Kotrz, and a private ketchup bottle joke; my painting ‘masterpiece’ – my art is the color of the wall, the actual hanging art work is by none other than Patrick Summers! )