I have a new pet peeve. Ok, maybe it’s not so new, but I reclaimed it today. Anyone who has traveled of late knows how crazy airports can be, and anyone who is breathing also knows that traveling in the vicinity of Christmas could be used as a sweeps episode on any of those so-called survivor shows! If you make it to your seat in one piece, you win a million dollars. Well, as I traipsed through the metal detector shoeless and beltless, (pretty soon maybe I’ll do it topless); I set off the dreaded beeper. You all know that beep. Well, imagine my surprise when the beep went off and within 2 seconds I had hands all over me. But that’s not what surprised me. It was 5 seconds into the mauling that I realized I had been given no “speech”. You know the speech. It starts with “Sit down, please, ma’am”. (They lose points right away with the ma’am talk!) Then the SPIEL comes. “Please stay seated until I have finished the explanation of how I am going to explain where my hands will go as I gently pat you down searching for the lonely coin, the forgotten hair pin, or (God-forbid) that nagging underwire.” And then, sure enough, they talk you through the whole procedure TAKING TEN TIMES THE TIME IT WOULD TAKE IF THEY WOULD JUST SIMPLY GET TO WORK AND PAT YOU DOWN. Well, happily, that is precisely what happened to me today. I set off the BEEP, and a lovely Englishwoman (calling me “luv” and not “ma’am” which earned her bonus points right from the start!), simply, easily, just patted me down. Basta. Her hands went everywhere, rather coarsely and abruptly, and you know something? I wasn’t the least bit offended, mistreated or shocked. Instead it was a beautiful relief to just have her get down to work, do her job, and let me go on my way. It was heaven to have a glimpse of the good ol’ days where folks just did their job, interacted with each other without that insane fear of being sued or causing harassment, and saved loads of time! (Thank God I didn’t have to endure THE SPIEL, because it might have caused me to miss my plane!)

Am I digressing? My sincere apologies! I just miss the days where people weren’t afraid to just move forward without constantly looking over their shoulder, you know? I suppose this is a great reason I’m in theater and not the corporate world – I’m not at all sure I would survive all those spiels!

Happily, the Royal Opera House gives a proper holiday break to its entire staff, and so I have the luxury of actually going home for Christmas, which is a rarity in my calendar! We’ve done 2 performances so far, and come back on the 30th for a live televised performance on the BBC 4. I think we’re all a bit anxious about the idea of having nearly 9 days between shows and returning to walk straight into the living rooms of numerous Brits, however I think we’ll be fine. We rehearsed in such a comprehensive manner, so thoroughly and intensely, that I think we’ll snap right back into gear. Personally, I’m a bit more worried about eating too many Flaherty Christmas Cookies so that I don’t fit back into my corset, however, I think we’ll all manage. 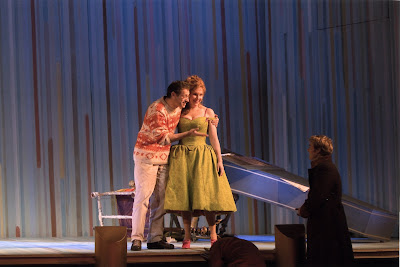 I want to tell you that this experience has been truly magnificent for me. I genuinely adore working at this company; there is a sincere atmosphere of ‘good will’, for lack of a better description. Everyone you meet, from the security guards at the stage door, to the marvelous costume crew, to the makeup staff and everyone in between, they are all truly happy to be working there. And it shows in their work. I don’t know if the average opera-goer is aware of how much it takes to get a show up and running. I spoke a bit about this in talking about the Met, and the same holds true here. If you are surrounded by people doing excellent work, creating a very positive atmosphere, you are MUCH freer to concentrate on your job, which is to go out and sing a hell of a performance, hopefully! Here, you really are treated like royalty, and it makes walking into the wings such a joy.

This production has been hard work, I must say. The directors, Patrice Caurier and Moshe Leiser, are officially at the top of the list of my favorite directors. They are PASSIONATE about music and opera, they love singers, they appreciate the difficulties we are faced with, but at the same time they are incredibly exacting and demanding. They truly DIRECT the singers. This was their first time meeting “The Barber”, and they dissected the piece from scratch, which meant anytime any of us would do a ‘stock gesture’ or anticipate a dramatic beat, or play a moment for a laugh, they would pounce on it and say “but I don’t understand what you’re doing. That makes no sense with what is in the score.” They did not allow any extraneous looks, movements, gestures or thoughts. Talk about demanding work. Sadly, we opera singers are allowed to get away with hollow gestures all the time, and when those are taken away from you, you have to lean more into the text, delve into the colors of the score, and then, the finishing touch: you have to trust it. If you’re not a singer, imagine the sensation of walking a tight rope from the top of Rockefeller Center to the top of the Empire State Building. No net.

The kind of work we did in rehearsal was heaven to me – sometimes I think the rehearsal process is my favorite part of my job, (but then I get to the opening, and I change my mind). But I do truly love to rehearse when it’s challenging and inspiring. We spent a lot of time finding the ‘beats’ or the dramatic punch in every single line of recitative. We searched for meaning through every coloratura passage. And while Moshe (the talker of the two) was laying the dramatic foundation with us, Patrice (the quiet whisperer of the two) would come and murmur in my ear, “Joyce, if you would only take slightly smaller steps during this aria, you’ll seem younger and more delicate, more vulnerable…now you’re taking very strong, large steps, and we feel like Rosina has already won. But she hasn’t: she’s still caged and very vulnerable. She doesn’t yet know HOW she is going to accomplish her goal.” This is the kind of direction I live for! We found a lot of physical body movements for Rosina that (hopefully) conveyed her youth and feisty spirit (pigeon-toed feet, a very bouncy costume, direct gestures), as well as striving to find that balance between someone who knows who she is and what she wants (thinking forward to the Countess in Nozze), with the girl who is just discovering it all for the first time (the volatile, impulsive Rosina). I just found it a completely fascinating, albeit draining process. 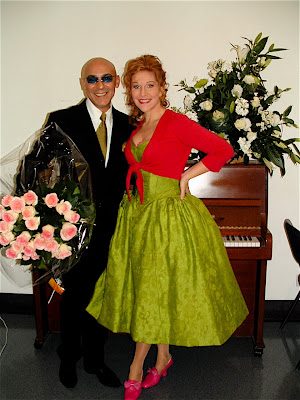 One last example of how special these two are: while Moshe would be seated in the middle of the orchestra section watching with a VERY keen eye every nuance and detail, Patrice would be gliding around the hall sneaking into the ‘cheap seats’ in the house, looking for any moments that might be covered or hidden from that spot in the back rear balcony. They care so deeply that everyone who has paid hard earned money to get to the theater is given a complete, total, heartfelt performance. And I hope with all my heart that this is what they’re getting!

I could right pages more about the work we did this past month leading up to the opening, but I know you have parties to get to, presents to wrap, or hopefully a great glass of wine to cheer with, so before this turns into an epic novel, I want to wish each and every single one of you a truly blessed Holiday, and that your New Year gets off to a brilliant start. It has been an incredibly hectic, rewarding year of growth for me, and I certainly look forward to many more of the same.

And if I had to make a list for what I wanted for Christmas this year? I suppose it would be more experiences like this Barber, and pat-downs at the airport with NO SPIEL! I’d also take health and happiness for all of us.

(Photos: With Moshe Leiser and Toby Spence during a rehearsal at the Royal Opera House; with Antonio Cavalco, the BRILLIANT costume designer for the show, who slipped me into a costume that to this day remains one of the VERY BEST I’ve EVER had the pleasure of wearing. He’s a magician!)