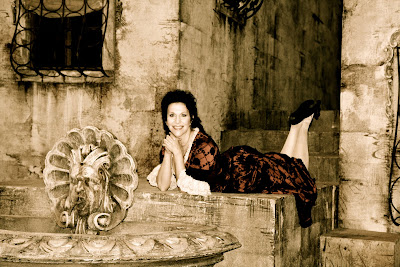 (On the famed Ponnelle set of “Barbiere” during intermission – photo graciously taken by an enthusiastic stage hand whose name I unfortunately missed: Grazie mille, amico mio!)

Well, what a whirlwind this past week was! What an experience Milano was! What a life, eh? I can’t write too much, because technically I’m on vacation (aaaaaaaaah) but part of my vacation plan was to catch up on over-due things, and writing this blog is one of them, so I don’t feel as if I’m breaking any spa rules, here! Besides, Milan was so special, I’m quite happy to share.

But let me get the invitation out of the way first: if you feel like participating in a vote that is not of a political nature, feel free to join the classical crowd at Gramophone to vote for “Artist of the Year.” I’m more than excited to share that I am among the nominees, and sharing the votes with the likes of Placido Domingo, Tony Pappano, Lang Lang, etc is rather AMAZING and thrilling! I won’t ask you to vote for me (but you are, naturally, more than welcome to!) but it’s a lovely tradition that Gramophone has to keep such a prestigious award in the hands of the people who really count: YOU, THE FANS! So take a look, register, and vote for your favorite artist!!

Parting thoughts consist of the remarkable run I had in Milan. Sadly, our other Rosina fell ill, and I’m sure you all join me in wishing her a most quick and complete recovery. But it meant that they asked me to fill in for the performances she was meant to sing: as a result, I performed 8 Rosina’s in 15 days, 2 times singing 2 performances back to back. Happily, Rosina agrees with me, but that was a long haul – especially considering that I made a mad dash to Rome between 2 shows to record Rossini’s Stabat Mater with Tony Pappano (“secret looks” coming up!)

But the Milanese opera lovers were out in full force, and I can’t thank them enough for the wonderful reception they allotted me, and the astonishing casts I was lucky enough to perform with. But here’s the thing: I realized during my last show with Juan Diego on the 23rd, that we don’t have anymore Barber’s scheduled together. Now, no need to panic – anything can happen in this business, but we both happen to be quite full for the coming few years, and we don’t have too many more Barber’s on the schedule. For all practicality, it is possible that the 23rd of July was our last performance of this opera together! I realized that going into the intermission and felt very emotional as the curtain rose for the 2nd act, for it has not escaped me that we have been a part of a very special team for the past few years, and Barbiere has certainly been at the top of that list. The musical excellence I think we found together was quite remarkable, and if this WAS the last one, I will miss it very much! Yes, we have other shows scheduled together, but Barber has been something special…

The next night I shared the stage with Lawrence Brownlee and we were overcome with similar emotions: we both come from America, having worked our way up the ladder of conservatories, local competitions, young artist programs, etc – and yet, here we were, bringing the house down in Milan at the famed La Scala. We had both had a VERY long week leading up to our final show, and during the final number, we just held so tightly onto each other, soaking up the moment, soaking up the emotion, and reveling in the beauty of it all.

During this remarkable run I’ve had the immense privilege of being in the very front row (surely a very coveted position!) listening to these two very different, but equally astonishing artists sing the demanding “Cessa di piu resistere” and each night has been a true joy as I could soak up their supreme excellence and commitment to the art form. I will treasure the memories of singing with such wonderful casts here in Milan for a long time to come. And if it’s the last time I grace the stage in Barber with these outstanding colleagues, the richness of the experience will certainly last me a life time!

So, 8 shows in a row is quite a lot, and as the last show approached, I will not lie that my excitement for getting to my vacation destination was growing rapidly! So as can happen during performances of a Rossini comedy – especially the last one of the season – the antics can start to really pick up! I’m not good at pulling on-stage jokes on my castmates – there are others who are true genius’s in that department! But I DID happen to bring my camera discreetly with me into “my room” during the final show! I spend a LOT of time during the first act in this particular production waiting in Rosina’s room, as there is no way to exit off stage – once I appear on the balcony, I’m stuck! So I thought it might be fun for you to see some of what I see while listening to the Figaro/Count duet, Basilio’s aria, etc.

You’ve seen me sing from the balcony, but most of you have probably never seen the interior of Rosina’s room. Simple, and yet perfectly detailed, here is were I quietly hum along to the Fig/Count duet, making sure the voice is “there” for the aria: 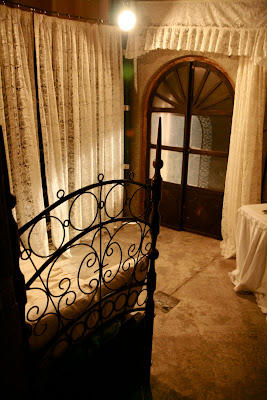 P.S. I have to hide my water bottles under the lace drape over the dressing table!

The hidden guitarist who accompanies the Count during the opening canzonetta, is discreetly placed over on stage left, and his eyes never left the tenor singing that night, so that his accompaniment could match the phrasing perfectly: 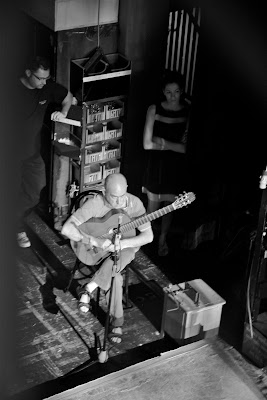 One of the true treasures of this 40 year old Ponnelle production (born the same year as your’s truly!) is that all the turns of the round stage are done BY HAND! That’s right – no hydrolics involved, only real Italian man (and woman!) power! They pivot the stage during the Fig/Conte duet, as I’m waiting by the balcony, so I get to see first hand the chorus of muscle working hard in tandem to turn this IMMENSE stage, and I think it’s amazing to know that so many people behind the scenes are making the magic happen! This isn’t a great photo, as it was VERY dark backstage, and obviously I couldn’t use a flash – but trust me, the proud stagehands were smiling and mugging for the camera perfectly: 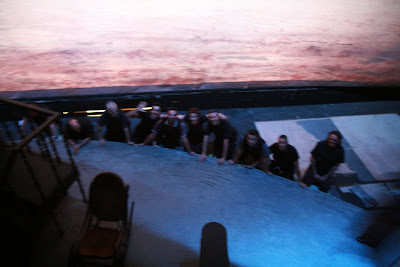 I just love the sepia look of this set. The intricacies of it’s construction, again, built over 40 years ago, still amaze and dazzle the public. He truly created a functioning, magical Seville! I enjoyed getting the chance to catch these sets without the wandering priests, nuns and singers and was able to see the design in it’s purest form: 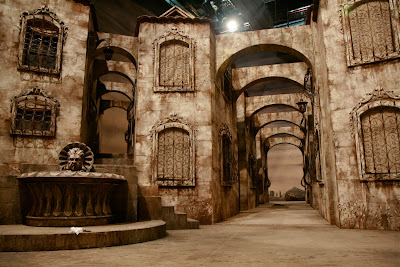 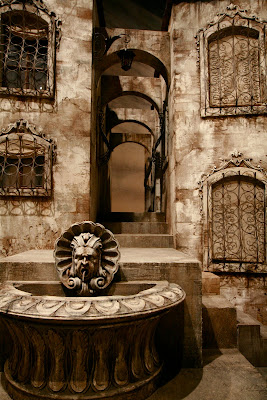 Again, there was no good lighting to be found backstage (the nerve!!!) but I squeezed out a photo of the beloved Ambrogio and Berta who add an IMMENSE amount of character and realism to the wacky world of Dr. Bartolo’s house: 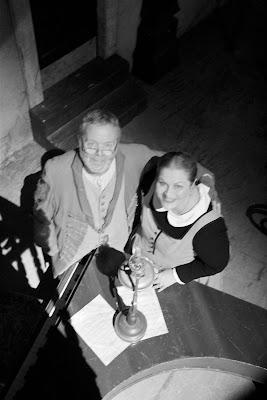 I really enjoyed having the chance to capture some of the inner workings of a production this epic – and I feel truly honored to have joined the legacy of amazing singers who have breathed life into this story on this perfect set! 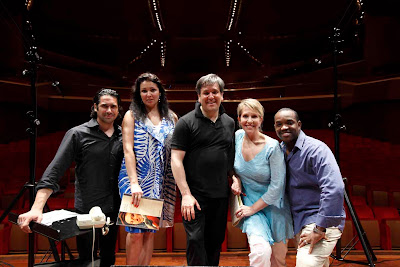 In Rome to record Rossini’s Stabat Mater with an astonishing line-up of singers and the incomparable Tony Pappano at the helm, we shared 2 days of intense, inspired music making. I think this piece is a true jewel, packing a most powerful emotional punch, and to sing it with the Orchestra and Chorus of Santa Cecilia (following up our collaboration on the Colbran disc!), with these outstanding solists, and with Tony – well, it was pure heaven. I had no business squeezing this in between shows at La Scala (it involved escaping after a show and driving to Rome with the world’s SLOWEST driver, arriving in Rome at 6:15 AM, ready to record at 10:30 AM!), but it was the only possibility, and one I did NOT want to miss. Funnily enough, the music gave me all the energy I needed, and the week proved to be exhilarating beyond words! I can’t wait for the disc to arrive, but in the meantime you can catch a sneak preview of the process here, courtesy of BBC World.

Well, if you’ve made it this far, you deserve a medal! And that’s it for me until I arrive in Salzburg – how nervous and excited I am to add Adalgisa to my repertoire, with such an exciting cast! Lots of work left to do, which includes RELAXING and BREATHING!

Thank you all for your support and try to stay cool in the coming weeks!!!