“Treat every show as if it were a broadcast!”

Last night we sang our 4th performance of “Ariodante” here in Geneva, and conventional wisdom would probably say it was our best show: what is it about the thrill of knowing your voice is going out live into the Universe, no re-takes, no ‘patch session’, just live, direct, immediate theater? I think I stumbled upon one of the reasons why I love this new technological wizardry last night: there is absolutely nothing else to rely upon to convey the story – simply the voice. Of course, this is the ‘old-fashioned’ approach to singing, which some might reasonably argue is a lost art – the art of text painting, vocal coloring, heart-breaking phrasing. Today a great deal of emphasis seems to be on furniture acting, trench coats, and the all-too-quick dismissal of ‘literal interpretations of the text’ which somehow has become ‘banal’ or ‘passè’.

Don’t call me a convert to that approach. I survived 3 years of studying under one of those (gasp!) old-fashioned Maestros who, for sport it seemed, used to send singers (like me) home in tears because they wouldn’t open or close their vowels enough, or because they were too preoccupied about making a ‘pretty sound’ and couldn’t take a white or black color far enough to truly express the devastation of “son MMMMmorta”. It was not a unique experience for me to recoil in rage or frustration because I couldn’t get all that he was asking for, professing all the time that he expected “too much”. Those were 3 of the toughest years in my musical life. But his is a voice that now, in the heat of the moment, continues to echo in the hollows of my head; when I know a broadcast is coming up, I can see his white-hot eyes burning 3 inches from my face, wider than a Michelin tire, screaming, “MEZZO!! OPEN THAT VOWEL! I DON’T HEAR IT IN THE VOICE!!! QUIT AAAACTING AND LET ME HEAR IT IN YOUR VOICE.” (He probably couldn’t hear it, because all I could think at the time was “Don’t cry. Joyce, don’t you DARE cry!”)

Perhaps I remember it harsher than it actually was (however, I’m pretty sure that’s not the case), but isn’t it ironic that years later, his is the guiding voice I return to for how I approach roles today? All the little red marks under the text in my score are what I would imagine he would scream for. And the longer I do this, the more I believe in his philosophy, the more I realize I have to learn, and the higher I set the bar for myself. A broadcast like last night serves to remind me that someone listening in Akron, Ohio (or, literally, in URUGUAY!) should be just as involved in the dramatic action, as someone sitting in the front row of the Grand Theâtre here in Geneva. It’s not that I don’t give my all for a perfomance without microphones at the front of the stage – not at all; instead, it’s the knowledge that the folks tuning in on their PC’s and MAC’s at home have ONLY the voice to tell them the story, sadly without the aid of those character-revealing trench coats. (Sarcasm intended.) THAT is real acting, me thinks.

In the meantime, got this photo of our soprano with the famous, fire-red hair getting into makeup: 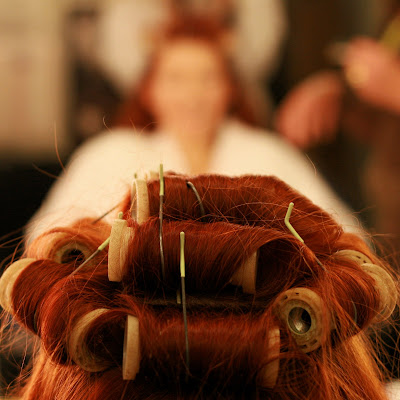