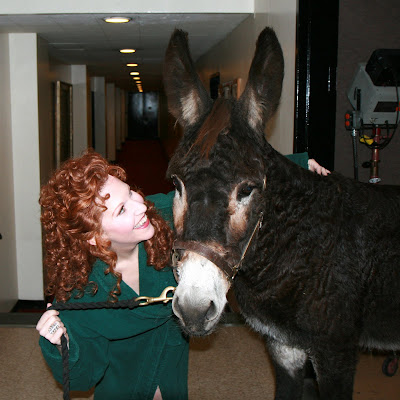 This is Gabriel, the adorable, mild-mannered Donkey that graces the stage of the Metropolitan Opera for our production of The Barber of Seville. He’s only one element that makes this run so fun and refreshing and wonderful. We are actually rehearsing this week to add in 2 new cast members, which means those of us that have been performing these past weeks have to bring in the new colleagues and get them settled in and familiar to the production, as well as adapt our performances to incorporate the new colors and interpretations of the new guys. I’ll be honest – it’s a BIT hard to come back to the rehearsal room and focus on the details again since we’ve already opened, but happily this group of singers (and friends, really), is so great, we’ve been having a wonderful time – with more laughter than should probably be allowed!

It makes me step back (once again!) and just revel in the reality of how much I love what I do. We’re singing, we’re playing, and we’re laughing (along with working, of course!), but it’s an environment of joy and celebration, and that makes all the difference in the world! We have had wonderful audiences who seem so HAPPY to come to the theater and LAUGH and let loose a bit, and so for us up on the stage, the enjoyment is all the greater.

Last Sunday I sang a joint recital with Eric Owens for the George London Foundation. A number of years ago I was the recipient of an award from the London Foundation, and it was an enormous help for me – not only financially, but also a huge vote of confidence, and I’m sure it helped a few reluctant people in the business start to take me a bit more seriously. Eric was also a lucky recipient and a fellow Houston Opera Studio Member. We hadn’t shared a stage since “Jackie O” back in 1997, and it was brilliant to hear his sonorous voice again.

This is just a short update, as so many things are going on here in NY this trip! If you’re in the Big Apple, please feel free to stop by the Met Opera Shop on Tuesday, Nov 3, for my first CD Signing at the Met for the COLBRAN DISC (in the top 10 on the Billboard chart this week!), and come help New York City Opera kick off its all-important 2009-10 season with our big gala on November 5, “American Voices” with a great line-up of American Singers helping kick off the festivities.

I think that’s more hyper-links than I’ve ever used in a single post before, but just trying to keep everyone informed!

I’ve also received a few bits of really exciting news this past week – can’t post anything yet, but I believe there will be some happy fans out there….will post as soon as I can! Oh, and for the FINAL kicker – THIS absolutely knocked me over when a friend from college sent it to me! You have to actually scroll through Halle Berry and Charlize Theron, etc. to get to me (I’m #14), but I thought it was pretty wild!! It will be one for the scrapbook – if I only had time to keep one!

So it’s a scattered, random-type posting, but it’s a big accomplishment during the World Series Week!