I got a most interesting email from a dear friend of mine who happens to be a stage director hard at work staging various scenes for a summer program in the States. As sometimes happens between us, one of us throws the other a curveball question that opens up a sometimes monstrous discussion, and always serves to be interesting food for thought for yours truly. I thought I would share the latest, because I found it very interesting to ponder. Without his EXPRESS permission (because it’s much later here than it is there) but with the relative certainty that he wouldn’t mind my divulging his question, here goes:

“Hey there!
channeling your wisdom and experience this weekend — working on

scenes in the past 2 days and trying to invigorate young minds into keeping these characters honest and open and not caricatures. How do you keep these guys physically different ?”

My response, with some liberal editing of the somewhat unfit things:

“Wow – see, this is why I adore you! You toss me great things to think about! I haven’t actually thoroughly thought through how these guys may “differ” – but perhaps I should? I suppose I tend to play them from their actual pending situation rather than consciously considering how to physically play them differently (maybe this makes me a bad actor??) But let’s explore:

Stephano is quite young and I think a real trouble maker, more or less, so there exists a lot of youthful, adolescent bravura and bravado (that reckless arrogance) as he taunts the sleeping enemy in song. It’s actually quite cheeky of him. But he shows a certain fearlessness since he hasn’t yet been called on to really participate in battle (which actually follows very quickly, however) He is definitely a younger physicality – probably closer to Cherubino certainly than Romeo – which means quick steps, sudden bursts of energy, a constant restlessness. Granted, I sang 2 performances of this guy (and I think it’s safe to say I’ve since retired the role!), and on a week’s notice, so to be fair, I can’t say I put a lot of psychological thought into his one scene!!

Sesto? Ah. S-E-S-T-O!!! Glorious, rich, complicated Sesto!!! He is definitely more of a “man” compared to Annio – because he’s older, has seen more, has been asked to do more, carries more responsibility, he has seen the world now with different eyes and knows things do not function in a simple black and white dimension as Annio most likely perceives them. Sesto is carrying a very heavy weight in this opera, because he struggles to find the solution that will satisfy those he loves so dearly. What his lover is asking him to do is unimaginable, and yet he feels compelled to follow her wishes, because he truly loves her. And yet, at what cost? I think this heaviness translates into the body: the quickness of a Cherubino is no where to be found, for he is carrying too much sorrow and confusion. There is most likely a heaviness in his step, and an unsure physicality of which way to turn – after his leader and friend, or after his love. It’s also very interesting to me to explore the eye contact (it’s all in the feet and the eyes, my friend!!) When can he bring himself to look at Vitellia? When does he not have the courage to look Tito, who he betrayed, in the eye? How painful is it the first time he looks into his eyes to ask for clemency? In Annio, we see someone who doesn’t have the same life experience as Sesto (or Tito) and so things are much more clear to him – he is the voice of reason because he has no reason to doubt that there is only one right way. As a result, his love duet is pure innocence and light, while all of Sesto’s interactions are quite full of pain and questions and doubt – Annio can be lighter on his feet, with more assurance in his step, for he does not doubt what the absolute right is of the situation.

Romèo – oh, don’t even get me started. He’s certainly the biggest “warrior” of the group, as the leader of the Montecchi’s, he carries much responsibility and certainly is revered by his camp. For his first appearance on stage he has donned the appearance of a page to plead first hand to the enemy to find a solution to live in peace (and it should be noted, to marry Giuletta…). That alone is a wildly brave action. Of course love is driving him, so there is no stopping him. For me, then, there is a real swagger and confidence in the opening scene, as he truly is not afraid of anyone in front of him – his only fear is losing Giuletta – but through his music and his text he is standing firm in his confrontation. (To be sure, there is a lot of testosterone pouring out of him here, so every gesture is swiftly fierce and loads of eye contact with the enemies!) But I found that when with Giuletta for the first duet, his impetuousness comes out, (“everything will be fine if we just flee together, what’s the problem?”), his adolescence shows its hand and he becomes much more boy-like in his accusations (“you have no pity for me”) and his pleas (“if you really loved me, you’d come with me”). I think he doesn’t yet have the maturity to find the right words here, as he knew how to find in his confrontation with his enemies earlier – but while his love for her is great, his youth keeps him from understanding her plight. And so it follows that his body becomes a bit more unsure, a bit more flighty with impatience, the shoulders slump a bit in frustration. When can he make eye contact with her, and when is it too painful?

Then, of course, we have the brilliant, heroic duet with Tebaldo, which is once again ALL testosterone and bravado (flying swords, disdainful gestures, etc), contrasted immediately with the discovery of Giuletta’s death, when, because his gut has instantly turned to both sharp ice and hot coals, his legs fold in under him, and he literally collapses in a puddle of despair. The chest caves in, he staggers, he falls, and then it takes all the strength he has to bring himself to stand back on those faulty legs to enter the tomb – simply because he must see her one last time. There is, I think, a numbness at the start of the tomb scene – a denial and disbelief, manifested by hardly being able to lift his feet or arms, moving almost as if comatose. Then of course, through the long scene, the despair and anguish build. We see a broken man at this point, I think, as the adolescent was left behind the minute he sees the funeral parade. Oh. What a role! 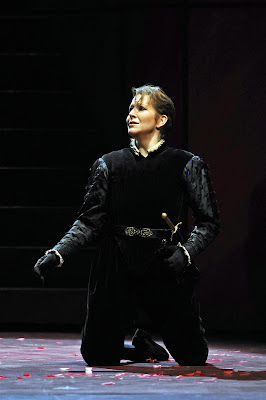 That leaves Idamante? He, like I think Romèo, teeters between adolescence and manhood. He is lost for much of the opera, in search of to whom and where he belongs, as well as to where his allegiance lies – how can he be a ruler of his people when in love with the enemy? (Think daughter of George Bush falling in love with son of Osama bin Laden…) He is a de facto ruler of sorts, who doesn’t quite know what to do with his power – we see this as he stumbles through his first scene with Ilia, awkward and confused as to what to do, how to step, where to look. To me, this scene is the complete opposite of the opening Romèo scene, for there is much ambivalence and searching going on, “can’t anyone tell me what to do?!?” – which means a lack of confidence in the body, an unsure stance, perhaps even a bit of shame in the eyes for not having the answers? Nothing is resolved, then as soon as he hears of his father’s “death” and then subsequent heart-breaking face-to-face rejection, he becomes totally lost, comprehending nothing – like a lost little boy. I think the way he walks is without direction in these moments, unsure with each step.

But then, in Act 2, Ilia in fact declares her love for him which is the catalyst for a boost in his confidence, and one reason he can stand up to his father demanding to know why he has rejected him. All of a sudden there is a more straight posture, a more sure step, more direction and less wavering in the physicality/gesture, and finally he can stand perfectly still as he takes the decision in the quartet of “yes – I’ll go and march into my most probable death – but you remember, you asked for this.” – and that’s the first real decision (I think) that he makes as a man, and so immediately the posture ages – it’s straighter and immovable. Then of course, because he’s made this transition into real maturity and understanding, the final offering of himself in the final scene is pure, uncomplicated and noble – something he earned, and therefore something he owns. The son in fact comforts the father. This is one of those roles where I think you physically see the character come into manhood over the course of the evening.”

Ok. Now that I’ve done this it feels incredibly pretentious!!! Yikes! These aren’t set in stone – if I were to revisit one of these guys, I’d surely find different subtexts, different tilts of the head as I took in a reaction in a new way. You see, I’m not the kind of “actor” that ponders these things ahead of time in a scientific method – I’m a bit more instinctual, delving into the text, emotion and the situation and reacting more in “real-time”. HOWEVER, thank you to my dear friend for giving me pause to line up some of “my boys” in a row and see how they measure up to each other!!!

(I think the winner in head to head competition would be Idamante – but only if competing at the END of the opera – after what he’s been through, he could survive anything. BUT I would predict a final match between Romèo and Idamante to be on the scale of a Federer v. Nadal!)

Those are my random, free-flowing thoughts on the subject, and definitely subject to revision at any given moment! But see how he gets me thinking? Love that!

1. Cherubino, Paris, with Gerald Finley as Figaro. (“Non piu andrai”)
*I don’t have any photos of me as Stephano, but couldn’t resist posting this because it was one of the most beautiful productions I’ve ever done, courtesy of Giorgio Strehler)

2. Sesto, Geneva, with Charles Workman as Tito. (“Deh, per questo”)