Well, we did it. The cast and crew and production team that the Santa Fe Opera assembled to pull together this rare gem of a piece, Cendrillon, figured out how it should go, and on Saturday night we breathed life into this magical fairy tale for a vigorous and incredibly enthusiastic audience. If I describe it as magical, I hope it won’t appear too naïve, but that is how I think we all felt when the non-existent curtain came down a few minutes before the stroke of midnight: magical. 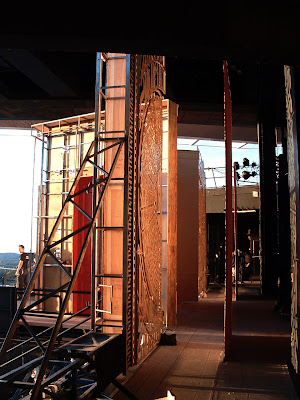 (A backstage view of the Palace gates)

I’ve had a bit of experience presenting works that the audience has no familiarity with (Dead Man Walking, Little Women, Resurrection), but this is the first time singing a story that every audience member has known since childhood, but with such a different ‘spin’. Hearing the mostly adult audience gasp and applaud simultaneously at the humor and setting restored my belief that music can be magical and carry people away if only for a few moments. I will never forget that feeling.

Of course, it must be said, that it wasn’t strictly the opera that did this: in my estimation, Laurent Pelly, our esteemed stage director and costume designer, brought such imagination, humility, pathos, heart and soul to the table that it was infectious. I think the local review said something along the lines of “…the apprentice artists flocked to Pelly’s ideas like bees to a honey jar…” which is the perfect description of how we all felt. He knows how to give an artist an entrance which immediately signals to the audience who this character is and what they are feeling; he knows how to actually ENTERTAIN a modern day audience (and considering it’s a jaded old fairy tale, that’s not an easy task) whilst never pandering to them; he knows how to trust the music, so that in the most tender and simple moments of the piece, he is content to simply lets it BE; he knows how to USE the music so that the stage movement flows ever so fluidly with the colors and textures coming from the orchestra. To my thinking, he is our generation’s “Ponnelle”, and I say that not to draw comparison, but to illustrate that in a day of many questionable operatic directors, we have among us a man who isn’t afraid to jump feet first into the art form that has singing as it’s fundamental base, that requires the use of the music and the intention the composer gave to us, and finds a way to combine it all with a sensibility that modern day audiences can grasp and ENJOY. 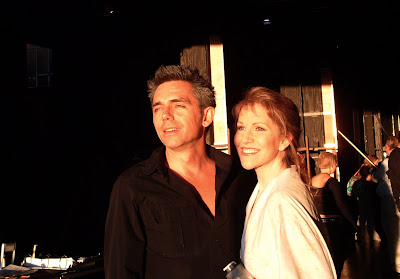 (With the brilliant Laurent Pelly, taking in the GLORY of a true Santa Fe miraculous sunset)

THIS is why I do what I do.

But wait! I’m omitting a huge factor here! There is this extraordinary cast on top of it all! It’s such an amazing thing to stand on this stage with 2 (dare I say it) true veterans of this craft, Richard Stillwell and Judith Forst, bringing such rare artistry and professionalism with them; with a just-arrived-on-the-scene star, Eglise Gutierrez, spinning gossamer vocal lines with real attitude; and a second year apprentice artist, Jennifer Holloway, who stepped in at the last minute and, I’m pretty sure, just had her big break last Saturday night, playing any girl’s perfect idea of Prince Charming! It is a true kaleidoscope of experience and talent, and it’s breathtaking to see each person find their way to the opening night downbeat in such different ways! It affirms to me that real artists walk their own path and define their own ‘voice’. It is thrilling to witness, and as always, a huge learning experience for me. I felt such a sense of pride to hold this cast’s hand at the end of the show, as each single person put their heart and soul into bringing this piece to life, and I’m certain the audience could feel that. It’s not always the case in our field, so when it happens, I want to scream from the rooftops that IT IS POSSIBLE!! 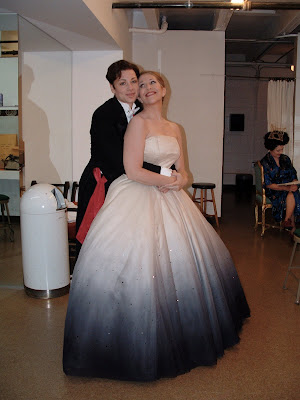 (The girl with the golden opportunity, Jennifer Holloway, who made the most dashing Prince Charming!)

I don’t want to miss mentioning the outstanding chorus, either. This is a huge show, and many apprentices are stepping up to sing small ‘cameo’ parts, or larger elements, such as the fairies that do tremendous work in this show, all with tremendous aplomb and professionalism. I have a particular sense of pride for this, considering that I was standing in their very shoes 11 years ago. It seems as though only 2 seconds have passed, just a mere blink of the eyes, but reality tells something a bit more vast! My ‘big part’ as an apprentice was singing one of the bridesmaids in Nozze di Figaro, and it was my moment to shine! I will never forget it, and as I’ve written before, I learned so many priceless lessons during those 3 months of non-stop toil, and it warms my heart so much to see the latest group not only rising to the level expected of them, but surpassing it. I’m so proud of them all!

Well, that just leaves me. I am still having a hard time realizing that we’ve opened, and I’ve officially debuted this role. It’s a role that I feel was handed to me on a silver platter, simply because I just love it, and the opera so much. It’s my first ‘big French role’, and I have the chance to engage a lyricism that isn’t perhaps as apparent in my every day repertoire, and I love every second of it. It’s very telling to me, because I cannot relax in this role at all; it is new and it is enormous, so it requires that my concentration and energy be employed at 100% in every moment. Having performed roles like “Rosina” and “Cenerentola” so many times, I walk out on stage and I have the liberty of playing with them, because I know them so well, know my pacing of it backwards and forwards, and there is a sense of flirting with them all the time. Cendrillon may become that for me some day (after numerous more performances), but for now, I’m working my tail off. But, again – a lesson to be learned: it shows me that every moment on stage requires everything I have, at all times, and in all ways, and I embrace that challenge with everything I have! Tonight is our second show and it will be most interesting to see how it has grown over these 4 days. I’m a person that LOVES to rehearse, so I was very sad to see that process here come to close, but now we enter a new phase, and the experimentation, risk taking, and playing takes on a whole new meaning! It’s actually just beginning! 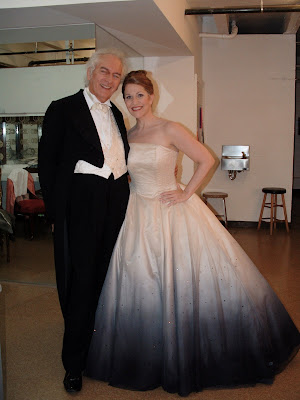 (Last but never least, with the legendary Richard Stilwell. He was the perfect Father in this show.)

So here is to all of the Cendrillon “virgins” having learned the show, pulling together probably the most beautiful spectacle I’ve ever been a part of, and to the Santa Fe Audiences getting a brilliant escape from reality for a few hours!! It just doesn’t get much better than that!