I just love my readers. You all are wonderful! I received the most interesting comments to my last post regarding my recent production here in Geneva. The comments were thought provoking, passionate, well-thought out, varied, insightful, and intensely personal – all the things that opera tends to stir up in people, and one of the reasons I LOVE being a part of such a crazy world. One person wouldn’t be caught dead at a production like this, and the next finds it one of the most moving, memorable nights ever in the theater.

The only thing I ask of an audience member is to try to come with some semblance of an open mind. I ask that of myself, as well, because it’s very easy to assume I know everything about an opera or particular character, or that, at first glance, a production may seem unreasonable or far-fetched. However, if I can remain open (mind you, I’m not speaking about being without opinion or easily brain washed), but simply OPEN – then I just might stumble upon something truly wonderful. Same for the audience.

It’s not an easy prospect, which is why it is, in my most humble of opinions, the highest of the arts – but we must keep searching and trying! But seriously, thank you for letting me express some ideas, and for your wonderful responses! I have truly enjoyed this production of “La Donna del Lago” and learned a tremendous amount from it, and I appreciate being given the chance to try something new and inventive. This keeps me alive as an artist.

But I want to lighten it up a bit now – even if I’m a bit behind in the timing. But some of you may have seen the cover of Gramophone for the month of May? (It should still be in your book stores for the time being.) I was lucky enough to be the cover girl, and had an absolute ball during the photo shoot. This is an element of the career that is a total blast for me – getting made up, being fussed over (which normally drives me crazy!) and playing in front of the camera for hours at a time. 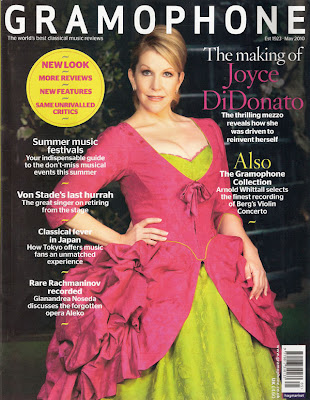 It’s definitely not a skill that is taught in the conservatories, but rather something that you try to acquire (usually awkwardly, or at least that was my case!) over the years. It is another universe from singing on the stage, but with the right group around you, it can actually be a lot of fun.

In this case, they wanted it to be clear that I was an opera singer, so they asked me to be in costume. At first thought this sent major warning signals off for me, because with all the talk of wanting to make opera feel more “modern”, I thought the idea of me in some stuffy old 18th century get-up with a big powdered wig would look ridiculous. Instead, we came up with the idea of using the beautiful costume from “THE” Barber in London: 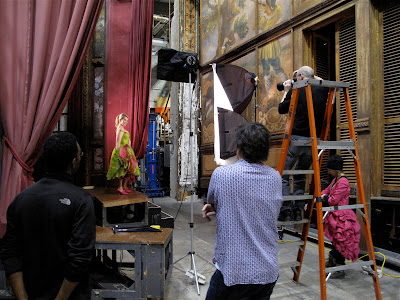 I couldn’t have been happier, because it is, truly, my favorite costume of all time. It’s slightly period, with that fabulous lace-up corset, but bold and brash with it’s vivid colors, not to mention infinitely “girlie” with the numerous pink touches. I’ll never forget that the brilliant costume designer, Agostino Cavalca, spent so much time in the early weeks of our rehearsals to see how I moved and how he might create a costume that was most organic to me as a performer singing Rosina. He succeeded brilliantly, and has spoiled me for all other productions. 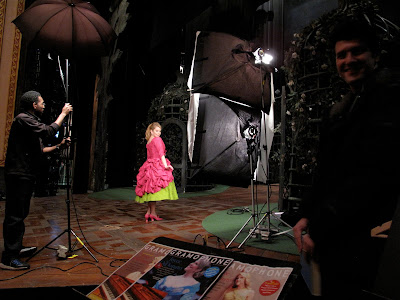 For example, the fluffy pink “over-coat” that fits over the base green dress is meant to mimic the petals of a rose – driving home the “Rosina” element over and over. It was such a joy to wear, and OH did it feel great to be STANDING in the costume once again!

One can never, ever underestimate how important a costume is to a performer. It is an enormous element to the character development of a role, and one that cannot be overstated. I have worn beautiful costumes and horrid costumes, and I have worn ones which enhanced immeasurably my sense of character on the stage and ones which have obliterated my sense of self-esteem, directly affecting my performance in a negative way. It is not an easy job, but it is SUCH a vital part of what we do. I have learned to be less passive in regards to the development of a costume, and cannot fault the ladies who have come before me, fighting, sometimes famously, for their say in what they wear. There is a fine line, and balance – as always – is key, but I have learned that it is a far too important part of what I do to let it go for naught.

I will MISS this costume!!

And then we just had some fun – our wonderful photographer was rushing to catch a flight, so we just let loose and had a bit of fun. I won’t lie – this is definitely one of the fun perks of my job! 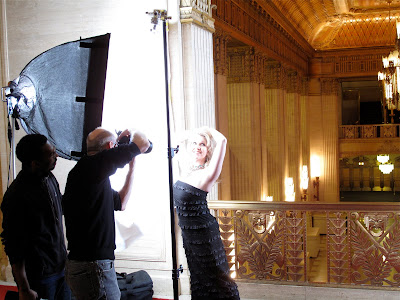 Thanks to the tireless Magda Krance for the fun, behind-the-scenes shots, including capturing my husband unawares!!

On another note, and speaking of fun “perks” – I get to meet some of the most astonishing, spectacular, talented, generous and most wonderful people in the world, doing what I do. One of them happens to be the (and yeah, I’m dropping names here!) the international best seller, and unabashed Handel Junkie, Donna Leon. If you never travel in airports or visit bookstores, you might not have seen her name – but if you have, surely you’ll recognize her as one of the best selling mystery writers of our day.

She has a delightful series going on with Detective Brunetti, set in her hometown of Venice, and the wicked and wacky circle of the inner world of crime and deceit is deliciously portrayed – not to mention tantalizing descriptions of the local cuisine in nearly every chapter! Well, my proudest claim to fame is that her latest book, “A Question of Belief”, happens to be dedicated to….me!! I was flabbergasted when she sent me the first manuscript with the inscription, “For Joyce DiDonato”, and even more astonished to receive a copy in hard print!! It’s a delightful read, and I, naturally, encourage you to go out and purchase one for everyone on your Christmas shopping list! 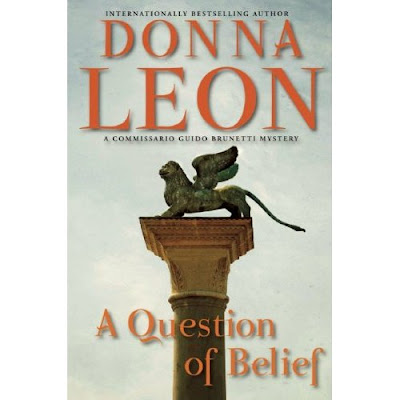 I’m proud to be able to say that you would be supporting an author who is single-handedly, one of the biggest and most generous supporters of the arts I have ever met. Granted – she limits her benevolence to All Things Handel, but you can imagine that this is just fine with me! She’s a true renegade!

2 more shows here in Geneva, which I’m very much looking forward to, and then it’s off to Paris to start rehearsals for another new production of this masterpiece. But if you had to miss out on this performance, or can’t make it to Paris, happily there will be a radio broadcast on JUNE 12 at 20:00 (European Time) on Radio Swiss Romande, Espace 2. I’m very proud of the work we’ve done here in Geneva and hope it will transmit as such over the radio!!!

In the meantime, can someone PLEASE do something about all this rain? Merçi, mille fois!