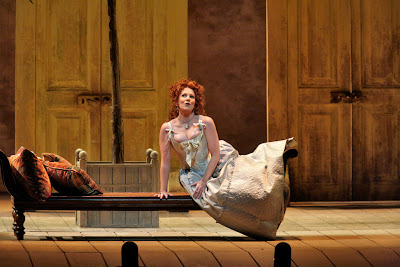 8 down, 2 more to go. Is it July, yet? I’m getting there! Someone told me a few weeks ago that there was definitely a light shining brilliantly at the end of this long, concentrated tunnel, and while I still may not actually see it’s welcome ray of relief, I sense the darkness is somehow giving way slowly, but SURELY! I’m counting on it. Now, because my seat on the train is facing backwards, lending itself towards a sense of nostalgia, let’s work that way as well:

Last night I stood in front of a near-capacity crowd in Madrid singing the great (and I do mean GREAT) songs of their Masters, selling myself as a “Maja dolorosa”, and it was quite nearly one of the most intimidating things I have ever attempted! I knew it was quite an astute audience, and a simple caricature of my “idea of a Spaniard” just wouldn’t cut it here (nor anywhere, of course!). I did trust very much in my passion for this music and in my feeling for it, but knowing I was daring to walk in the hallowed grounds of Teresa Berganza and Victoria de los Angeles (one of my true idols), hesitation gripped my throat just a bit in wondering if they would get any of the words or not, if they would find my presentation genuine, and if they would be accepting of my contribution to ‘their’ music. Nerves crept into my head a bit as I inverted the odd phrase here and there, inventing several words that I can only pray did not have a ring of “Taco Bell” about them, but overall I did my best to embrace every syllable and evocative emotion. The result? I can’t say that it was my most carefree performance to date, but I gave it everything I had, and throughout the evening they gave me a reception muy caliente, calling for 3 encores in the end. Few “Brava’s” have meant as much to me as those I heard after the de Falla and Montsalvatge pieces – truly, words to be cherished!

Previous to Madrid, it has been quite a dense and fulfilling tour. It was most special to sing a recital in Paris; as I said during the concert, I have always considered Paris my “European home”, as it was here that I really got my big breaks on the operatic stage, and I have had the opportunity to sing so many varied and rewarding projects there. The time had come to sing a recital for this warm public, and seeing so many friends and longtime supporters attend was such a gift to me.

Amsterdam was such a thrill, I cannot say. (But, naturally, I shall try!) The recital hall there must truly be one of the best (if not the greatest) in the world: it pulsates with a profound history and significance that cannot be feigned, and from the walls the unmistakable sense of a rich and noble legacy bleeds through each nook and cranny. I found myself overwhelmed with tears as privately I took my 30 minutes to warm up and feel out the space: to find yourself completely alone at a piano, ready to make music in such a hallowed space is an experience never to be taken for granted and always to be cherished. Wow. And that was even before the public arrived! Happily, they welcomed me with the warmest of Dutch arms and I was reminded once again of what a distinctive, extraordinary city Amsterdam is! 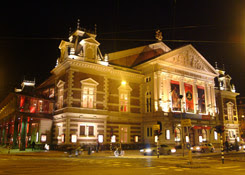 What can possibly be said about the experience of singing on the stage of the Wigmore Hall in fair London Town? Yes, the hall is magnificent, if only for that grand dome alone; however, it is certainly the audience that furnishes the air of magic and possibility. Such a thing can never be manufactured and certainly it is rare, for they engage so directly in the performance, that a true duet is performed between artist and listener. The silent, electric hush that settles over the hall when the quietest passage is being sung intoxicates me beyond words. I think I told them I felt as if I was having a mad love affair with them – don’t tell my husband! 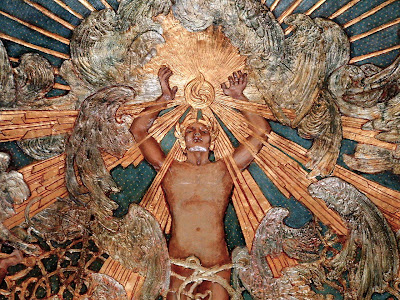 Speaking of my husband, let’s talk about Moscow! Maestro Leonardo Vordoni and I made our debut concert together as the “Maestro and Mezzo Show” on April 3 in Moscow. I had chills as my plane touched down, for the thought that I could pass freely into Moscow and perform for this eager public in what was once a cold war enemy to my country dumbfounded me. What an experience to see such a colossal change in our lifetime. Now as I’ve said before, I try not to make this journal too weighted with things personal, as there is rightly another diary for that; however I cannot help but brag about what a fabulous job my husband did bringing Handel, Mozart and Rossini to a Russian Orchestra, eliciting them to play with real style and life. I know I’m duly biased, however, he was beautiful to watch and to make music with. It just flowed out of him. We made the very easy and singular decision early on that we would not entwine our professional and private lives more than we ever felt comfortable doing, and as a young conductor, it is the only option for him to start his career completely on his own and not ‘via’ my career (which is one of the gazillion reasons of why I love him!), however, this was a golden opportunity on which to capitalize and I’m so happy we did. I was just so very proud of him, and found him a brilliant conductor to make music with. Bravo, Amore Mio!!! 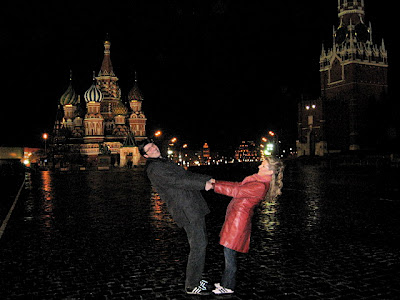 (Celebrating in Red Square — what beautiful thing to be able to do!)

And finally, my bid for the Academy Award (eh hem!): As I flew home HIGH as the Russian Space Station from the final performance of Rosina at the MET, transmitted live across the world via radio and screen, I knew I should have sat down then and there to chronicle the events of the day; but as I said, I was simply too high. Melancholy actually set in not too long after the final cut-off, for it was hard not to think: “Well, that’s it then. That’s as good as it will ever get!” But I absolutely choose not to think in that direction. Instead, I choose to celebrate every single thing that brought me to that moment in time, and as fate would have it, most of those ‘things’ had purchased tickets to watch the show! I made a few phone calls as I was getting into makeup (my brother was pulling into the parking lot of the packed theater in Seattle, a sister was tailgating with girlfriends in KC, a friend was running late in Houston, and a husband, almost more nervous than I was gave me the pep talk of a life), but those nerves I felt were quickly settled by knowing that so many supporters were cheering us on from every corner imaginable. The buzz backstage was off the charts, as every cog in the MET wheel was set on hyper-alert, and we singers were all doing our best to not let the nips and tucks, notes and tweaks, cameras, microphones and overall frenetic chaos infiltrate our concentration. 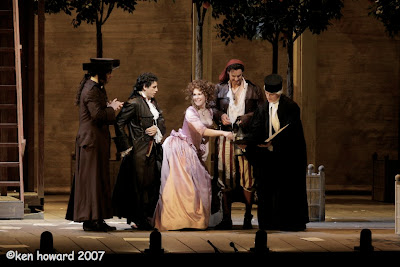 From the opening chords of the overture I can usually tell what kind of show it is going to be, and I knew right from the start of this particular trip to Seville that everyone would be on top form, leaving nothing back in the dressing room. It was thrilling to watch my colleagues soar with such prowess, to feel the exhilarating energy from the audience pervade the theater, and to be so completely into the story and into the moment that the ubiquitous presence of those cameras and boom mikes seemed to simply melt away. Magic ensued. The fact that I was performing for so many people in such a larger-than-life way felt, on the one hand, completely natural, and on the other hand, beyond the wildest dream I could have ever dared to visualize. How beautiful to be given a moment such as that: one that united so many of my loved ones across so many miles, one which challenged me as a performer as never before, and one that will live in my memory for so many years to come. Profound gratitude is the only way to describe what I feel.

So, my train is nearly pulling into the land of the exhilarating Jota and of the inspired painter, Goya, and my once invincible laptop battery is drained, so it must be time to say adios. Not only Zaragoza calls, but also, alas, still begging for my attention is that pesky Octavian, not to mention a looming tax deadline (the extension has now become a celebrated ritual!), and the myriad other things that tend to eternally hover on my to-do list! I best get right to it, as I think it’s the only way to witness that burning, brilliant light at the end of this tunnel first hand – I sure hope it was worth waiting for!
Besos!