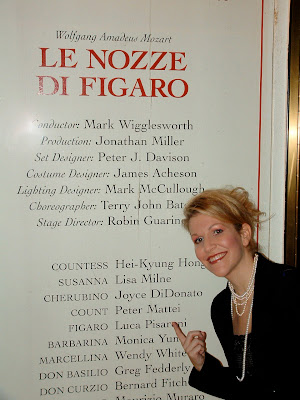 I no longer get an asterisk! When you debut at the Metropolitan Opera House, your name appears on the infamous poster outside the entrance in the Lincoln Center Plaza, and on the ONE and ONLY occasion that is the evening of your debut, you are given a delicate, beautiful, perfectly proportioned asterisk, signaling that you will appear on the stage of the Met for the very first time that evening. My asterisk was for November 2, 2005. It was my one and only shot to have that little star by my name. And I loved it! I had set the goal for myself to find a way to truly enjoy the event, knowing that if I could manage that for myself, the audience might just come along for the ride; and in fact, I think they did. I truly had the time of my life, and will certainly not forget it for quite some time.

Perhaps the best part of the evening was being able to share it with so many beloved people – in some ways it felt as if it was a night more for ‘them’ than for me. As I’ve mentioned before, it takes an enormous amount of support and encouragement along the way for someone to be given the chance to have that asterisk by their name, and during the entire evening of chasing Barbarina and various chorus girls, I felt as if each one of those many people in my life were on the stage with me. Throughout the run I had numerous people make the long trip to share in the experience with me, from my parents, to 2 of my sisters, to my little brother, old school friends (Mark and Robi, hello!), to my college accompanists, several people in the ‘business’ who really took risks with me and gave me incredible opportunities, previous sponsors (now dear friends), so very many special, wonderful people. And even though it felt like a 3 weeklong wedding, it was glorious. I felt very warmly welcomed by the discerning NY Audience, and can guarantee that I will never forget my Asterisk Evening at the Met! 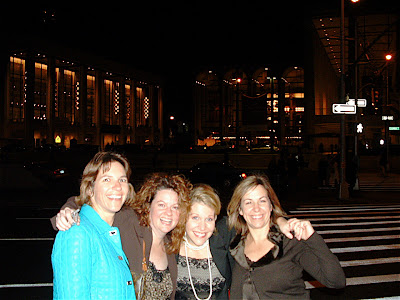 But, it wasn’t all Cherubino for me during NY. 5 days before I was to leave for my first day of rehearsal, back at the end of October, I received a call from my agent, asking if I could get on a plane immediately, learn the staging of the Met’s Cenerentola in a day, and stand by for what was to be it’s opening performance of the season the following evening. I was in the Apple store trying to get my files transferred from my old PC to the new Mac (which I’m still not completely comfortable with!), thinking, “but if I leave KC now, will my computer be ready? can I still get the oil changed in my car? how will I possibly pack for the next 8 months in such a short time? what about my niece’s baptism? how can I get my prescriptions lined up in time? and where is my score of Cenerentola…oh, never mind, I don’t think I need it.” I don’t know that I’ve ever had a more hectic 24 hours. It wasn’t the prospect of jumping into the show that unnerved me (I actually was quite confident I could get through it and enjoy it a lot), but it was the prospect of not having the final 5 days at home to organize my life for the next YEAR. You see, I’m essentially on the road, more or less, roughly until the start of 2007! So that threw me into a bit more of a panic than all those notes Rossini wrote.

However, I just managed to pull it off, and I had a magnificent rehearsal the next day, where all the covers were called in to rehearse with me. I can’t thank them enough – it was probably the last thing they wanted to do on their day off, but they were incredibly supportive and the most generous of colleagues. I had a lovely surprise when I walked into “the office” for that crazy day: I saw on the podium Scott Bergeson, who was my conductor in the Merola performance of Cenerentola back in 1997. It was really phenomenal to walk into a nerve-wracking situation and feel the genuine support of such generous colleagues such as Scott. And you know something? It was an incredibly easy rehearsal, as if we had just sung together last week! I don’t think people that sit in the audience have any idea of the incredible talent that fills the halls and the underground rehearsal spaces there at the Met. There is an unbelievable abundance of people behind the scenes that make that place produce the magic on a nightly basis. My esteem for them is off the charts. In the end, the scheduled singer went on, I had a big dinner with dear friends, enjoyed a Cosmopolitan, (or maybe it was two), and tried to come down off the incredible rush of the previous few days.

But that’s not ALL! In the midst of Nozze rehearsals, I was asked to jump into the new production of Romeo and Juliette, which was a highly anticipated event slated for Natalie Dessay and Ramon Vargas. It’s a role I’ve never sung (and have since retired, in all likelihood!) and I had to think very hard about the energy it would require. Here I was, not yet with that coveted asterisk in my back pocket, and being asked to learn a completely new role for the Met? I definitely didn’t want to risk sacrificing my Cherubino to learn another role, but I was surrounded by incredibly patient and supportive people, and with a few sleepless nights, and a couple of incredibly long days, I did indeed get through, and managed, again, to really enjoy it.

So that was my New York Experience. I left that amazing city bursting with emotions, feeling wholly exhausted, spent by the energy that is New York City, and completely charged at the same time: after all, I had worked hard for that little, perfect, memorable asterisk! 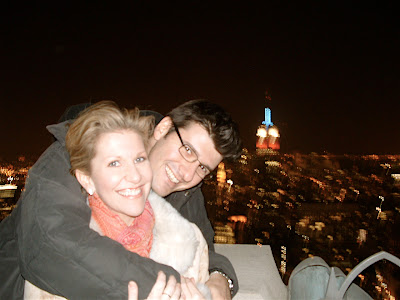 (Photos: Losing my asterisk outside the MET; with my beautiful sister, Amy, my dear friend, Jana, and another of beautiful sisters, Emily, all helping me celebrate surviving the Lion’s Den behind us; and with the love of my life, Leo, atop Rockefeller Center, enjoying the glory that is the Big Apple)