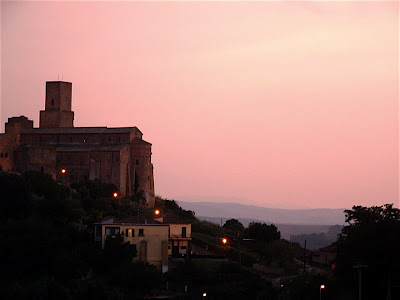 It’s finished! We’ve just wrapped up a week-long recording of Handel’s “Floridante” here in Tuscania (situated just outside of Viterbo, which is near Rome, and is famous for its hot springs, having been the ‘hot spot’ for numerous Popes and dignitaries along the way). The recording wrapped up at about 7:30 pm, with just 30 minutes to spare, and I’m exhausted! The recording process really is quite arduous, and doing it in a very remote place, in an isolated church that hasn’t been used for over 20 years, full of wood worms leaving trails of sawdust on the old tile floor, well, it poses all kinds of challenges, to say the least!

Floridante is a really interesting work. It is one of the shorter of Handel’s operas, but I’m afraid it wouldn’t be considered his finest by too many people; however, it is full of these little jewels that come out of nowhere and carry you away for that fleeting moment or two. My character, Elmira, for example, has this short miniature arietta, with a longer accompanied recitative in the middle, and for lack of a better description, it is pure heaven. When Handel spins out one of his plaintive, lost, lamenting melodies, I want to sing nothing else for the rest of my life. He can capture time in a bottle and suspend your very breath with the simplest of passages. The text of this piece couldn’t be more simple:

“Dear night, bring back my beloved.”

And the melody simply descends, unfolding so melodically with such pathos and pain, reaching out over more than an octave as if one can’t possibly let it end — can’t afford to endure the loss of hope. The day we recorded this particular masterpiece was just as the devastation from the hurricane Katrina was finally breaking into the news. The images of the wreckage and desolation were inundating all the news and internet channels, and amid all the loss and anarchy of the situation, I didn’t know where or how I would find the ability to corral my energy to think of making an “authentic baroque recording” of a, perhaps, somewhat slightly inferior Handel opera. I find myself asking, “What does this really matter?” Instead, as ALWAYS happens, the power and potency of music overwhelms me, and immediately, in this damp, musty, moldy, noisy old church in this provincial, sleepy, creaky, little Italian town, with the opening chords of this piece, I felt as if Handel had been a witness to this devastation in the deep South of the United States first hand and had composed this piece in the very early hours of the morning on that very day, and brought it to us strictly to mourn the loss we were seeing before our very eyes. “Bring back our loved ones.” With this short little piece, music captures the mourning of a nation, (and also, in my eyes, elevates this opera to a much higher level!) It is the absolute power and mystique of music that grabs you in that place you can’t find on an x-ray, that absolute truth that words alone never seem to be able to identify. It is music. And it gives us the permission to weep, to laugh, to lament, and to simply be.

It also reminds me that humans have been suffering for centuries. That devastation happens. And that all throughout history, we have been struggling for relief, for understanding, for expression, for insight. There are a handful of people along the way who have thankfully preserved their insights for us, and this “Notte, cara” by Handel is definitely one of the masterpieces. I’m so privileged to have sung it. I hope when it arrives next spring, New Orleans and the surrounding areas will be well on the road to recovery.

For a bit of the lighter side of things, I have to say that singing with a baroque band is really such a joy. Now, I’m not one to give too much credence to stereotypes. However, there does seem to be a bit of a difference between baroque players and those in standard orchestras. For one thing, there is no union, no great contract fees for them, no health benefits, and they work many more hours. As a result, it is generally said to be true that they love this music very deeply, otherwise, they would simply get a better paying job. What I sense from this band, as well as William Christie’s and the others I have worked with, is that each individual player cares a lot about the level of music making. It’s a much smaller group of people, and through poker games at night and improvised volleyball matches on the 10 minute breaks throughout the day, you really get to know the members of the orchestra, and therefore there is a real camaraderie that develops. For me, this is priceless. You sense there is a real level of respect and collaboration between the singers and the band, which really excites me: I can tell if I really charge my vocal line, they will definitely react and counter with a great sense of drama and passion. I love that interplay and sense of improvisation! That is what this music is all about. 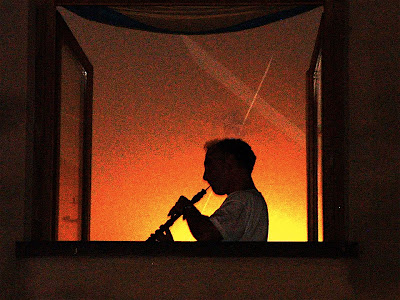 One of the downsides about this project is that we are housed and fed along the way as part of the deal. Being housed isn’t a downside, and being fed in Italy sounds like a great thing, I know. HOWEVER, you must understand: being fed in Italy consists of pasta at EVERY meal. I’m not joking. I’ve been here for nearly 3 weeks and I never IMAGINED there were so many ways to prepare pasta. I don’t think the cucina has once repeated a pasta, (except perhaps we had pesto twice, but that was with a different kind of noodle!) That’s 3 weeks of meals, twice a day: 42 meals. 42 different kinds of pasta!! I know I shouldn’t complain, but really, it seems nearly criminal to indulge in such reckless dietary abundance! I almost feel like looking over my shoulder at every meal to see if the Carb Police are staking us out! Then there is the problem of the olive oil. Definitely. There’s a big problem with the olive oil. You see, here in this part of Italy, they use their own oil. By that I mean, the olive trees outside the window actually produce olives from which this oil is then pressed, and arrives at the table. Talk about fresh. You see, this olive oil is actually, honestly, truly GREEN. I’ve never seen oil this color before; even in the fancy stores in the States we get a watered down version. GREEN! Delectable, mouth-watering, “I can’t believe my eyes” GREEN. And so of course, it is necessary to sample it at every meal. Naturally. On a piece of bread. With a bit of salt. 3 weeks of meals, twice a day: 42 (plus the occasional extra) slices of white bread with GREEN olive oil and salt.

Forget my complaints. I’m in heaven and I’m never leaving!!

The kind (persistent and demanding) folks at Deutche Gramophone tell me they are shooting for a 2006 spring release of our disc. It should be a very special one. However, if my fast arias seem a little bit more weighty than normal, don’t blame me: I was sleepy from the pasta. 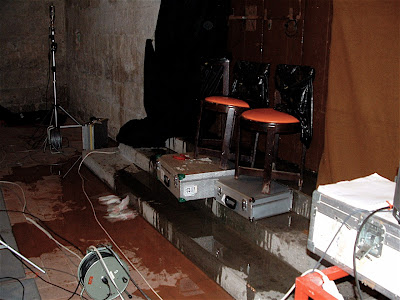 (Photos: The view from my window to the centuries old monestary of Tuscania – such a picturesque vision; the expert oboist from Il Complesso Baroco rehearses into the evening hours; the glamorous aspect of recording in an atmospheric little Italian church as the rains come in — it meant suspending recording, as well as praying the equipment would survive!)