As is only fitting, to conclude this nearly three-week sojourn, I end it as I began: sitting in an airport with an 8-hour delay! Of course, this time the difference is that I’m functioning on 2 hours of “sleep”, having had to get up at 5:30 this morning to take the car to Madrid in order to promptly and patiently wait for the enormous travel delay I saw coming 3 days ago from all the US weather forecasts of winter “wonderlands”. But I can’t help but be struck by the difference in myself – not only the sleep deprivation, but the stark difference between eager anticipation and exhausted satisfaction.

Leaving Kansas City three weeks ago, I hadn’t sung the program with the orchestra since April, and a lot of musical water had passed under my bridge (Monteverdi, Romeo, Idamante, Vivaldi, Elvira, Chausson, Beatrice…) – how would I feel coming back to this enormously demanding Handel project? The tour was off to a jet-lagged start, with that crucial 24-hour delay throwing me for a curve, but we blasted off and found our footing very quickly. Enormously important venues – some “home towns”, some new ground – greeted us warmly and generously, and I have very treasured memories of each stop on this 7-city tour. A blasted bug gripped me for the last 2 shows, but with the wonderful help of the organizers, I weathered the viral storm, and left the amazing hall of Zaragoza knowing I had given my all.

So how does “The Fury” feel after 7 intensive concerts? Draining, to be sure. But I relished having my hypothesis of Handel’s ability to probe the psychology of characters proven so correct. I found myself discovering new things in each and every piece throughout the tour – sometimes Medea reveled in her nastiness just for the sake of feeding her loss of power, sometimes she betrayed herself to be much more a victim; Ariodante more cruel one night in his scorn for Ginevra, the next more destitute in his confusion and loss; Dejanira, well, always mad!

It also reminded me that even in the course of the very exact program, singing the same notes, uttering the same words, delivering the same essential character – there is no accounting for the magic that can unpredictably take over and carry you (or the orchestra) through a musical kaleidescope into a different realm, and this is something you simply cannot script or plan for. Each piece took on a different life of it’s own, causing different reactions in different people – and this is the ethereal thing I ADORE about what I do – the moments you cannot control, the emotions you must simply let fly and land as they will. It is alive!

Now, all that having been said, I’m thrilled last night was the last concert! I’m glad I have 3 weeks ahead of me to recoup, study and hibernate a bit (so you won’t see me here quite as much, I’m afraid – it’s DOWN TIME!) That’s part of the essential pacing of something like this – building recovery time (mental as well as physical) into your schedule and taking full advantage of it. When I step back into the fray in January, I hit the ground sprinting, so I plan to take full advantage of each day.

But before signing off, a few souvenirs from the tour, and a very heartfelt thank you to everyone who came out in the bad weather to attend the concerts, who saved money to purchase tickets, who took a risk and bought DISCS (!), who waited so patiently in line to say hello, and who supported with your applause, your words and your enthusiasm. It was a pleasure to sing for you all!

From “Delphi” who apparently had a seat behind the stage in Salle Pleyel – a different vantage point I never see: 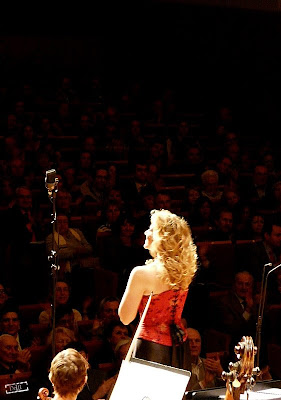 Also from “Delphi” who apparently moved around to the front for the second part: 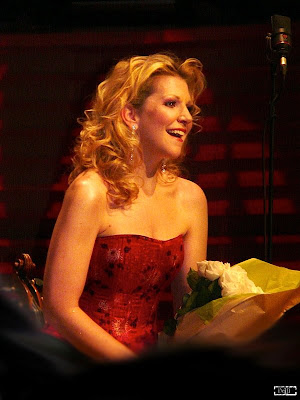 Taken by my dear friend, Michael B after the Paris concert, as my other dear friend, Bill M, finally realized his dream of re-enacting his favorite scene from the movie, “Diva”: strolling with a diva through the rainy streets of Paris in the wee hours of the morning, holding her umbrella, standing just a pace behind her. Apparently this is my diva-look: 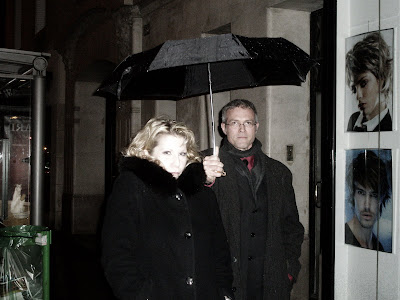 After the final concert, we let down a bit. I’m holding the ties of two of the FABULOUS wind players – the ties which the entire section bought for €3 to color coordinate with my red “furious” corset, and who also stood up on stage to toss me 4 red carnations after the final bow last night, which was the sweetest thing in the world: 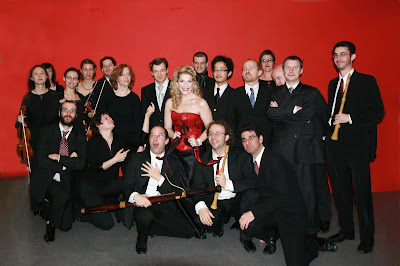 And finally, the entire group, Maestro Rousset, included. It was a real pleasure to make music with you all! Until we meet again in Kansas City, and New York, Hasta luego, amigos! 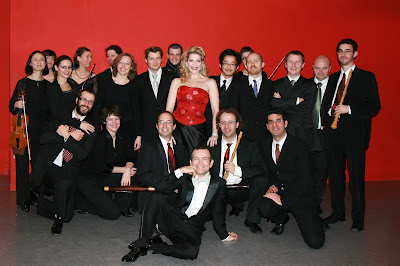