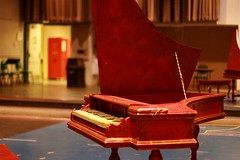 I’m grateful for the great artists who have come before me, creating links in this complex chain of operatic tradition and legacy. I work in a field replete with historical practices and unforgettable legends, but at the same time, we search for ways to make it come to life in the moment, thriving and spontaneous against this backdrop of memories and ghosts. At times it can be overwhelming to think that on one level we are seen by some to be ‘competing’ against these ghosts, but ultimately, if we’re focused on competing, how in the world can we be focused on communicating?

What made me think of this, was our final rehearsal today: even though we’ve already opened, we’re putting another Bartolo into the show (the inspired Andrew Shore), and so we were thrust back into our tiny, dingy rehearsal space (after having lived in the lap of luxury on the beautiful stage and under the flattering lights!) with select set pieces hijacked from backstage. This particular set/prop, I am told, was the ONLY surviving piece from the original purchased production from (I believe) Parma; the Lyric had bought the production sight un-seen from the Italian theater, but when it arrived in Chicago, it was entirely too small for the Lyric’s stage. They trashed the entire set, except for this red harpsichord – with its foam keys – and scrambled to come up with the current settings inspired by Magritte in a matter of months. I look at it and can’t help but think of the Italian workers who crafted this delicate instrument decades ago, the technicians who have restored, reinforced, and repainted it, and the singers who have sat at it’s delicate keyboard to tell the same story we are telling, some 20 years later. I LOVE this connection to the past, but I also love that for us and for many in the audience, it is the very first time they’ve seen it – and so it springs to life for the very first time (again) living in full the moment.

I love how the theater teaches me.