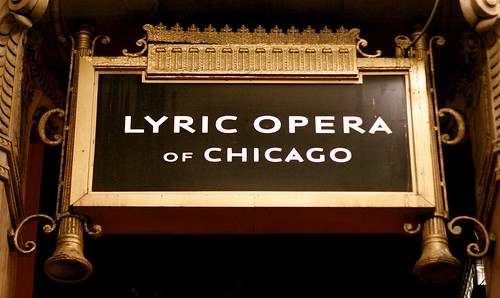 It has been over 8 years since I last walked through the stage door of the Lyric Opera of Chicago; in 1999 I was fresh out of the Houston Opera Studio, and was hired to cover the role of Ruggiero in Handel’s “Alcina”. As far as I was concerned, I had MADE IT! I was a professional singer collecting a flesh and blood paycheck. I had been granted a front row seat to watch Renee Fleming, Natalie Dessay and Jennifer Larmore shape their performances in daily rehearsals, under the guidance of Robert Carson (in his famous production from Paris). My daily goal was to act cool – to act like I really belonged there, so no one would guess that I was secretly freaking out at my ‘luck’, and that they wouldn’t realize their mistake in my casting and kick me out of the room!

Anyone lucky enough to have scored a ticket to one of their sold-out performances surely have those glorious voices still ringing in their memories. It was a magical time for me, because here I was, not being kicked to the curb, and witnessing first hand how a world class performance was born.

The image of Renee hovering in the shadows in the far upstage right corner in utter despair during “Ah, mio cor”, or of Natalie making love to Bradamante’s left-behind jacket with each staccato and flirty turn of the phrase in her show-stopping final aria of Act 1, or Jennifer’s coaxing of the most plaintive legato line for her “Verdi prati” were all hallmarks of great singing and acting, and without question set the artistic bar to the highest level for this impressionable young mezzo. I didn’t want it to end!

So many memories linger from that magical time here:

*Each of those stars were real people, generous in their artistry and humility, giving breathtaking performances, and serving as a beautiful example to an up and coming singer – one who, by the way, was clocking their every move.

*John Nelson, the conductor, graciously agreed to hear me (a real-live nobody) for an audition in his spare time, which in turn began a lovely relationship with him, giving birth to many memorable projects together – and encouraging this eager singer that you just MIGHT be in the right place at the right time, but you will never know when it’s actually coming – so preparation really is the key.

*A simple gesture can make all the difference. Having served as a cover on COUNTLESS operas and projects in the years of my training, I knew the drill: be impeccably prepared, sit quietly in the corner of the room, never making your presence known unless called upon, and graciously never express how disappointed you are that after all your work, you will never have the chance to prove yourself to everyone. You can’t begin to imagine the thrill I felt when I, a cover – a mere understudy! – received an invitation to the opening night party. That was a first for me – just to be included was an enormous honor.

But I was not prepared for what followed: after the wine was poured and the buffet had been depleted a bit, Mr. William Mason, LOC’s General Director, rose to make the traditional introductions of the triumphant cast to the patrons and donors in attendance. As he began speaking, it dawned on me that he was talking about the importance of great covers in this repertoire – and he actually took the time to say my name and introduce me to this star-studded crowd. I know it doesn’t sound like much – a simple introduction – but I was bowled over by what he was saying: my service had been invaluable to the Lyric Opera of Chicago! That gesture made such an impression on me, that I knew I would do anything to return to a theater that treasured their artists in such a demonstrative, sincere way.

*But perhaps the most important memory of that period came without warning or lighting bolt: I remember sitting quietly in the “cover corner” watching the intense rehearsal unfold before my eyes, and thinking, “You know – if I had to go on for a performance, I would actually be ok. I think I could actually make something of this role.”

Again, it doesn’t sound like much, but I felt some sort of an ‘artistic shift’ happening within me. It wasn’t “I can sing this as well as her…” as I probably would have arrogantly and ingnorantly professed a few years earlier. Not at ALL – she sang it gloriously. It was, instead, a sense that I had something I wanted to say with this music – something that wanted to be heard. In master classes now, I offer my opinion of how important it is for “young artists” to find a way to bridge the HUGE gap between being a well trained, conscientious student to being an individual, unique artist who actually has something to say.

Perhaps this is a lifelong pursuit (in fact, I truly hope it is!), but I clearly remember something in those rehearsals slowly dawning on me: “I think that I can actually DO this”, and consequently, a confidence began to build in me – not a fabricated buffer I gallantly called “stage presence”, but something that was growing deep within – something that began a shift in my thinking from “I hope they like me”, to simply aiming to express.

I don’t mean to sound that I have it all figured out, but it is nice finally returning to this wonderful company for my ‘official debut’, being able to connect a few of my personal dots, being able to thank Mr. Mason personally for bringing me back, and for being able to pull up a chair in my old cover corner and strike up a conversation with the very well-behaved young artists!