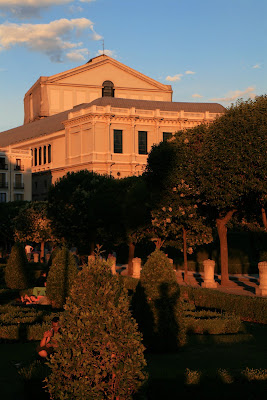 I’m grateful for the Teatro Real (especially in this RIDICULOUS LIGHT! I mean, seriously, are you kidding me with this?!?!) It’s a truly lovely place to work for a number of reasons, but really the only one I need to list, is the amazing people that make up the staff here. It’s a relatively "new" theater, in that it re-opened just over (roughly) 10 years ago as an opera theater, and so all the people on the staff have a sense of ownership, that they have built this theater back with their own sweat, and there is a tremendous, beautiful sense of pride that permeates all aspects of the hustle and bustle backstage. They really treasure the quality of work they do, and THEY LOVE THE MUSIC! I’ll tell you, in as much as my experience can judge, this is the only backstage staff I’ve encountered that can sing along with "Fuor del Mar" – and I promise I’m not exaggerating! It’s a gift to be working alongside people who really love the music, the singers, their jobs – and that have great senses of humor, something especially valuable in a show like "Idomeneo".

I first stepped into this city nearly 7 years ago to the day for my first European “Cenerentola” in the summer of 2001. I don’t think I had the nerve to actually speak to too many people, as I was just trying to stay above water and act like I was full of confidence, when I was anything but, and I just remember secretly hoping that I wouldn’t be fired. It was the first time I met singers like Raul Gimenez and Carlos Chausson, and I remember them for their generosity and willingness to offer advice and support to a new kid on the block. I think it was when I first started to realize that I was joining a family of remarkable people – not an evil den of divas waiting to rip your vocal cords out, but kind hearted, hard working, real people. I snuck into the back door as a complete (and I mean, completely) unknown singer, and the public here reached out to me with their warmth and made this scared singer feel most welcome.

Two years ago I sang my first German role here (Since it was only one line, I’ll opt not to count the “Slave” in Salome which was my official Houston Grand Opera debut role.) During the run, my Dad turned quite ill, and I knew I had to go home to be with him in the hospital; the outpouring of support from the theater made an unbearable situation possible to endure. I will never forget their kindness. And now I’m back, surrounded by the same beautiful people, a bit less worried about being fired, more familiar with where to find the best gazpacho in town, and happy to listen to them sing along backstage! Besos para todos!!!