I’m grateful for amazing experiences. One such event, which I sadly don’t have a picture to help illustrate, was watching the MOST astonishing tennis match I think I’ve ever seen (and I even remember those epic McEnroe/Borg marathons) yesterday on a backstage monitor during our piano stage rehearsal. I’ll tell you, there is nothing like watching those monstrous battles for every single point in the 5th set while listening to “Fuor del mar” live in the background – that messes with your head a bit!! But the match was everything I love about sports: great sportsmanship, the battle for each point, unbelievable displays of sheer excellence, and an absolute tenacity to stay firmly concentrated in the moment! Oh, it was breathtaking! Thankfully for us (less so for the two exhausted players, I’m afraid) the weather cooperated in delaying the match so much so that we could sit in the technicians lounge backstage and watch the final 20 heart-stopping moments. The other reason it was so fabulous? I was watching Nadal, the Spaniard, win his first Wimbledon Trophy in arguably the greatest tennis match ever played – IN Spain surrounded by nervous, excited, PROUD Spaniards! Tears were shed, embraces all around – ah, yes, it was very good! 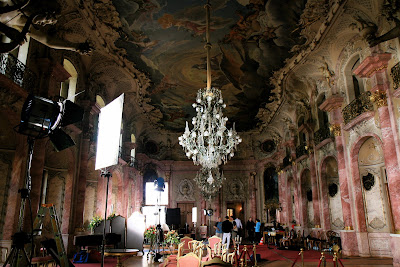 I DO, however, happen to have a few snapshots to illustrate another wonderful experience which I hinted at briefly a few weeks ago. Between performances of Romeo in Paris, I jetted off to an amazing castle just outside of Hannover and spent the day filming a scene for what promises to be a fascinating docu-drama on Handel for “The Big Handel Year” of 2009 to be aired on German Television (and perhaps later on DVD) in this modest “room”. I met the dashing filmmaker while recording “Alcina” last fall, and he invited me to take part in one of several clever re-enactment scenes. It’s hard to describe the day, other than to say it was one of the longest working days of my life, (a LOT of singing, a fair amount of screaming, and some rather odd positions….) but I LOVED every single fascinating moment of it. The day was full of learning, observing, risk-taking, people-meeting, and serene, overwhelming surroundings – everything a good adventure needs! 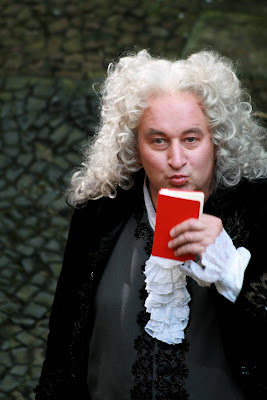 I don’t want to give too much away, as I feel the obligation to let the editing happen and to let the air date get a bit closer – but I think it will prove to be the perfect mix between entertainment, information and shedding light on this fascinating figure, G. F. Handel. They employed an incredibly colorful German actor to fulfill the role of the master himself, and when in wig, he is a deadringer for the late composer. They also had a number of supers on the set to fill in the roles of townspeople, cobbler, etc, including the daughter of the lighting wizard, who was wily enough to play right into my camera – girl even knows her angles already! (I loved watching how he lit the room to capture the mood of candlelight on the high definition screen – that was a lesson in true art) 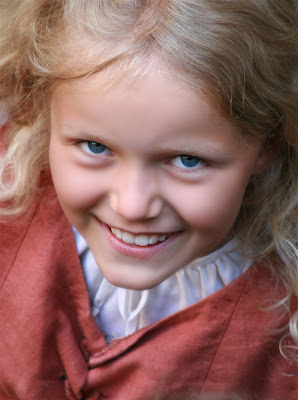 I’ll keep the suspense going a bit more, and as the date gets closer (most likely in early spring) I’ll fill in a bit more. But in parting, the Singer rocks out, once again, with the Master (on their lunch break, mind you!): 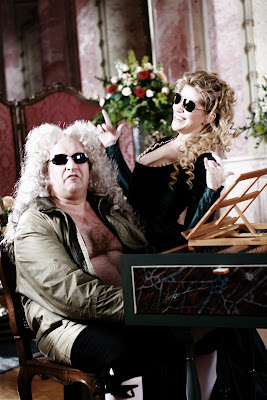