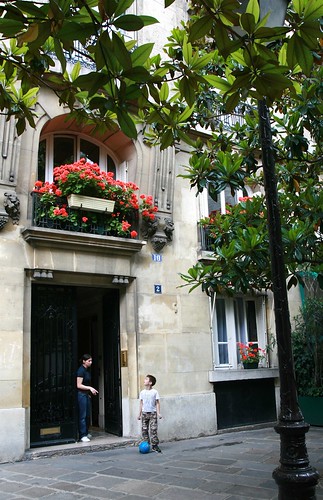 I’m grateful for reminders that essentially, we are all the same, regardless of nationality, race, religion, blah, blah, blah. There is a vast number of things that unites us (so much more than we bother to acknowledge) than which divides us: we all have to answer to our Mothers ("Time to come in for dinner", "Do I have to?" "Yes, my dear – you do."), and we all are trying to live our lives as best as we possibly can. Am I wrong on this? Sure we get off track here and there, sure our doctrines differ, but really – what culture doesn’t recognize and embrace the above scene I encountered this afternoon, strolling home from a slew of interviews? It makes me smile. It makes me hopeful.

And while this is DECIDEDLY NOT a political blog (although I have had to work in earnest at times to not throw a bloody fit or two here) and will not ever become one, I did, however, just want to share with you that today I am very happy and, indeed, proud to be an American. Regardless of your affiliation, regardless of how you may vote in November (if you’re American), right or left, green or pink, surely no one can deny that what occurred yesterday in my country was monumental.

It said his victory also "demonstrates the opportunity that the world’s most responsive democratic system gives its voters to be inspired by an unknown; the opportunity that outsiders now have to reassess the superpower that too many of them love to hate. Win or lose in November, he will have gone farther than anyone in history to bury the toxic enmity that fueled America’s civil war and has haunted it ever since."

It was nearly 40 years ago that Martin Luther King inspired and boldly declared "I have a dream." It’s a beautiful thing to see that dream come to fruition – not only with his nomination, but with the historic primary which led to it: a woman and a black man vying for the Presidency of the United States of America. I couldn’t let this moment pass without saying it feels so very good, as an American who sees the world from outside her borders so often, to be able to say that I am proud of my country today. (It also puts me in a wonderful frame of mind for my all-American recital on Saturday!)