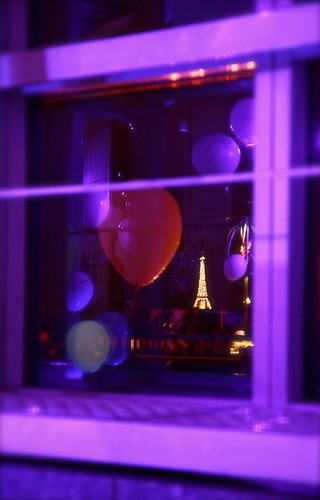 I’m grateful for every single worker and designer and financier who built the Eiffel Tower, as WELL as the organizers who made the BRILLIANT decision to add sparkling, diamond lights which switch on at the top of the hour each night and dance for 7 minutes. It makes an iconic, breathtaking structure dazzling beyond words.

I was trying my best to be discreet during this gala party – I mean, really, it’s terribly tacky for the diva to sling her DSLR over her shoulder instead of a Gucci evening clutch encrusted in crystals – I know! But honestly, I couldn’t care less….I was glad I had my camera to sneak this shot out the window of the 7th floor of the Opera Bastille, tinged with the purple hue of the decorative lighting and swarming in balloons. It rivaled the souffle and wine to be sure, and reminded me one more time of how truly magical this city can be. (Um, when you’re not stepping in the dog p**p on the street, that is!) 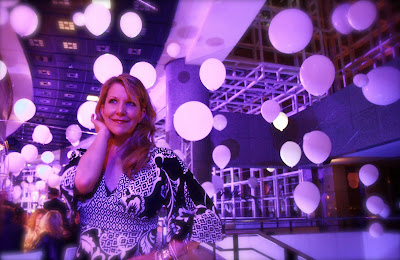 Sometimes these gala dinner’s can feel like more work than the actual opera, to be perfectly frank, but this one was a delight. I was seated between two fascinating people – to my right a man who runs 2 theaters in Paris, one is the host to a popular hip-hop festival in January, and to my left the head of the Paris Opera Ballet. She’s a fascinating lady, and I hung on her every word as she spoke of watching each performance of Maria Callas’s run of “Norma” here at the Paris Opera from the wings. What I found fascinating was watching her gesture with her expressive arms, describing how it seemed that Callas was gathering up all the forces of all the energy around her with immense intensity and then emitting it from very deep in her torso. It was obvious how much this “dancer” took from that “singer” and it highlighted for me how intertwined our different disciplines are. I was very fortunate to hear her take on those historic moments on the stage. When I’ve spoken about being a tiny link in the chain of this opera world, feeling the ghosts of these historic singers as I stand on the same stages as they did, this is what I am talking about! That is never lost on me.

It was a lovely way to finish celebrating the 4th of my Capuleti’s – officially, I’m halfway through the run, which again makes me shake my head in disbelief and ask “how is it possible?” I am amazed at how much I learn with each show, and while I’m still completely devastated at the end, I am enjoying myself completely and totally. The pacing comes more with each performance, and hopefully the depth does as well. 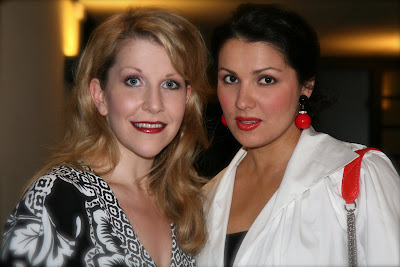 I do have to share one comment which I received that may be rank as one of the oddest, and yet coolest compliments ever: before the curtain call of the last show, as I’m peeling myself off the floor of the tomb, my Giuletta said, “I forgot to tell you before, don’t look at my stomach when you are singing to me!” (It’s no surprise that she happens to be a bit pregnant at present….) so I’m thinking, “Oh fabulous – I just played this whole death scene holding her hands and her stomach – great! – I’m making her self-conscience!” and I quickly apologized, to which she replied, “No, no – it’s not that – it’s that he likes your singing so much he’s kicking like crazy, and I don’t want you to see that and start laughing!” So the baby likes my singing? That’s cool. Maybe they’ll name him Romeo in my honor…

UPDATE! Whoops! I forgot to add my photo credits!
I got lucky w/ the Eiffel Tower shot,
Ms. Anna Netrebko captured the photo of me surrounded by the balloons,
and Operafan graciously shot the photo of Anna and I after a show!