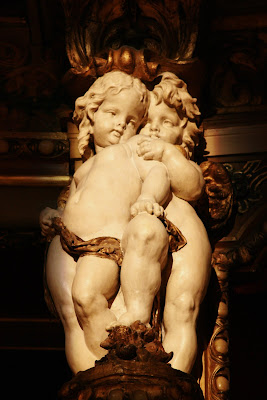 First things first, I’m grateful for really cheeky cherubs and those artists who make me smile. I’m sorry, but it’s impossible to look at these little guys and not appreciate the humor of artists/sculpters of yore! I want to know the story here…and I love an artist’s work from years past that makes me feel that way. This intimate pair is tucked up on top of the stage left (to your right, if you’re sitting in the theater) of La Monnaie here in Brussels watching "attentively" over all the proceedings – actually, they seem a bit distracted to me! Priceless body language, priceless expressions, cheeky CHEEKY little cherubs!!

So onto the recording. Tonight was the “dress rehearsal” for the concerts which open tomorrow evening at La Monnaie for the Handel Concert/Live recording, “Furore”. My “dress” consisted of my beloved “Puccini Hates Me” t-shirt chosen simply on a whim. Actually, maybe that’s not true – I think subconsciously I was hoping to get some of the orchestra members to laugh, but I’m not entirely sure I was successful. Regardless, everyone was quite concentrated, so perhaps the laughs will come later. (One can hope…)

We had a 3 hour rehearsal this afternoon, working through the entire program, revisiting tempi, cadenzas, atmosphere, and generally feeling each other out in regards to theatrical temperament and musical ideas. However, the reality is that it can take awhile for a group of strangers to gel, because while they are very used to working together as a group, I arrive on the scene as a complete outsider, with piles of new music, with my crazy ideas – and it just takes time, rehearsal, patience and a bit of daring to find the way to make it all fit together. I think we started finding that in the rehearsal this afternoon.

But it’s also this precise encounter that boggles my mind: total strangers can be brought together in such a significant experience through the language of music. THAT blows me away. I don’t know any of these players, where they come from, what their ambitions are, what their struggles have been to bring them to this particular spot, who they love, or why music is important to them – and yet I am relying on them to support me and to walk through this with me. I get to make music with them! Anyone who doubts that trust is no longer bankable today need only to look at a musical rehearsal of strangers: it’s ALL about trust. (And that’s only us players on the stage – it’s not even considering the audience, which functions on an entirely different level of trust and surrender!) Once again – the stage teaches.

So we had a 2 hour dinner break which found me hunting at the opera canteen for nutrition (I had been hit on ONE too many times on my Metro ride to the theater earlier, and I was most definitely not in the mood for more of the same during my dinner break!) which was bad news, because the only appetizing option on the chalkboard was a “pasta” dish (and by that I mean a rrrrreally soggy, sorry attempt to marry flour, eggs and water) with tofu. Wow. It was bad. But I needed the energy, so I tolerated about a third of it, grabbed a banana and called it a “meal”. A few minutes at the piano, and I was ready to go.

They had the microphones in place, sound checks all set, and we laid down the entire concert in just over 2 hours. One take: done! Of course, I made a million mistakes in the opening numbers – nerves, excitement, over-zealousness, etc. And at the break, I snuck in to the recording booth to hear a few minutes of it, for I had the sneaking suspicion I had been pushing a bit. Upon hearing the take I realized I was not entirely correct – I was pushing a fair amount (which is technically more than a “bit”, I believe!) I’m sure it was mostly due to excitement and nerves, but I knew immediately that I didn’t want that as a final result, so I made some adjustments for the second part and think I’m closer on track. That’s the GREAT part of doing a recorded general rehearsal like this – it’s the time to test your limits, work out some of the wrinkles, and get your performance ready for the public. The good news is that I can listen, for sadly I do not have a pair of “ears” out in the theater that knows my voice, that knows my limits, etc and can talk me through it. (My beloved partner and exceptional pair of ears was whisked away by a big theater in NY, go figure!) So it’s essentially up to me and my ears, and if I can filter out EVERYTHING that I hear that is BAD (which on first listen, is EVERY SINGLE NOTE), then I’ll actually make rational choices and, hopefully, improvements!

But tomorrow night is not about the recording. Tomorrow night is a live concert, and it is my debut at La Monnaie, and I plan to revel in it, bringing everything I have to the table; that means I get the luxury of simply going back to the music, letting myself get carried away, and bringing this project to life under this gorgeous ceiling: (they turned up the lights today so I got a better shot of the real colors… 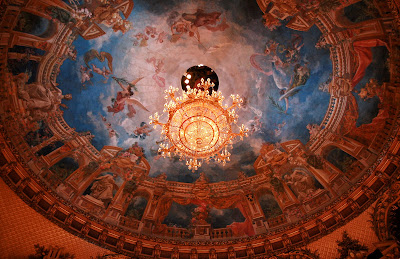