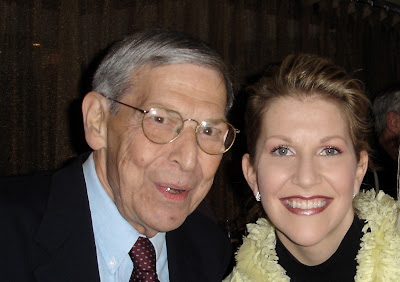 I suppose I will start out with a polite apology, asking for pardon for what will likely be a most personal entry. I really promised myself at the start of my ‘website adventure’ that I would strictly adhere to things pertaining to my career and to the stage, but I’m afraid in this business, the two too often co-mingle, and so late this night, I’m here with my most personal thoughts, and here lies a big part of me that wants the world to have a glimpse into my past few weeks. Glimpse away:

Last Thursday, in the early hours of the quiet morning, my Father passed away. I suppose it’s quite audacious of me to attempt to write about him, for how do you sum up a life? A death? A moment? I think the geniuses I represent on stage (Mozart, Handel, etc.) have come the closest to capturing something so delicate, so I know my attempt here will be most feeble, but it will be honest, as I would like to try and express a tiny bit of the great influence my Father had on my life and how grateful I am for his loving guidance.

I grew up going to Mass on Sunday mornings watching my Dad conduct his prized choir. The Vienna Boys Choir had nothing on my Dad’s group. They sang Byrd, Thompson, Bach, Handel and Palestrina like no other chorus possibly could. As a 10-year-old girl, I wasn’t yet old enough to join in the festivities, but I sat on the sidelines waiting MOST anxiously to be old enough to take part, breathing with all his cues as if they were meant just for me. And when I finally stepped in, able to take direction directly from him, having him look at me while he cued the altos, well, I thought I was the greatest singer to ever live, knowing that he needed me to “help keep them in tune” (or so he led me to believe!). I was on top of the world.

He came to every choral concert I had in high school and nearly every one in college. His approval was the only applause I looked for or ever needed. He attended the “Seven Last Words of Christ” concert I gave as a sophomore in High School at a local church, and the entire way home our conversation nearly exploded with spiritual fervor. He taught me in every single moment that we were together through treasured conversations about faith, about doubt, about life, about music, about fear, about joy, and about staying young at heart.

The last 2 weeks were spent at his bedside, as he was hooked to a machine that took each breath for him. Such a far cry from the man I remember building our house, hiking Byer’s Peak, working at his drawing board, or reading over my term papers. Because there was a breathing tube planted in his throat, those precious, cherished conversations were no longer possible. The million questions I still have for him will have to remain unanswered, and ‘faith’ will have to be my companion, as I trust that all I really needed to inquire of him was already asked and answered. After a lifetime of connection and conversation and experience, our time was limited to hand signals, blinking of eyes, and my simple, unqualified attempt to help him die. But I must take solace in the fact that we did live so many moments so fully together. However, had he passed away 100 years from now, it would have been tragically too soon.

Infinite thoughts rip through my mind in these days, more than seem possible to process, but I think my attempt to write tonight, is simply to have ‘the world’ know that a truly great man walked this earth, touched my life, and left me much richer than would seem practical. I can say unequivocally that I would not be the person that I am without his loving, and unending guidance in my life – in every possible way.

I could talk about the numerous musical experiences we shared: in the choir loft with him at the helm, on his first trip to Europe to listen to me sing in Notre Dame, in Hamburg to hear me sing with Domingo, sitting around the TV watching Don Giovanni from the MET, my high school choir performing Bach’s “Crucifixus” to his astonishment – but none of these moments capture all that he was. I have to talk also of the letters he would send me when I was so far away from home giving me comfort as nothing else could, of the stolen moments on our front door step watching the spring storms roll in while he assured me tornados could never actually hit our house, of watching the most spectacular electrical storms in the night skies of Colorado while he spoke of the vastness of the Universe and God’s design for all of us, of how he could reduce his 7 children to piles of giggles with the mere mention of “The Big Mouth Frog”, and of how he never missed an opportunity to look deeply in my eyes and tell me how proud he was of me – not only as a singer, but as a person. How persistent he was that I knew the difference between the two.

In a million years I could have never asked for a better compliment.

I’ve never watched anyone die before. My Dad certainly wouldn’t have been my first choice to learn the ropes with, but this was the plan – and ultimately, completely out of my control. How truly powerless we are in the face of death. And yet, through it all, my Father was teaching me. Teaching me how to surrender and how to let go with dignity. In one moment I held his hands as he looked at me to say he couldn’t breathe, and all I could tell him was, “Imagine you’re breathing in that fresh mountain air, Dad.” And his breathing would slow down and he would catch it – for that moment. And then I’d pray with him, and he would mouth the familiar, soothing words along with me, “Hail Mary, full of grace…”

I was his voice for those few, precious moments.

His last day will most certainly serve as fodder for great reflection for the rest of my life. We took him off the ventilator around noon (he had told us he was ready), and the following 3 hours were spent deciphering and following his orders: “get me a new room (out of the ICU), sit me up, put me in a chair at a table, with a glass of white wine and let me drink.” We actually accomplished it all, including the most genuine of toasts, ‘Here’s to your life, Dad!” The drinking of the wine took all the energy that he had, but the smile that came across his face was truly priceless. He was now ready.

We’re not sure when he actually took his last breath, as his final moments were so serene and peaceful. I watched this man, my beloved father, orchestrate the laying down of his life during his last day, and with his dying breaths, he was teaching us all how to let go. He could never have done that if he hadn’t lived his life with such integrity, joy, service and faith. But his welcome reward for a very hard life of struggle and uncertainty was the most beautiful of deaths.

My sadness is profound and so very deep, but an unbridled joy is waging a great battle against it, trying hard to smother the pain. That’s because in a million years I never could have asked for a better father. I marvel at the man I knew my whole life, and surely will never know the extent to which he influenced and shaped me. The joy and faith he passed on to me will always be the defining goal that I strive to attain. My sadness feels endless, but I believe my infinite gratitude and joy of sharing in his life will win out over time.

Ironically, through his final hour, his death will always serve as the most brilliant example of how to LIVE.