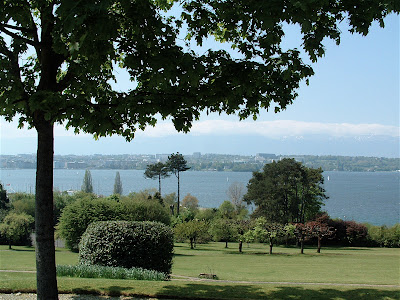 For those of you keeping track, I am now, officially, at the halfway point of my 4-month long excursion overseas! So far, my Martha Stewart-inspired packing job is serving me well, apart from a newly torn pair of jeans (thanks to a day of staging Dejanira’s mad scene), and I think I may just make it to the end! However, after having spent 2 (TWO!) months in various hotels, getting into an actual apartment here in Geneva felt like winning the lottery! Each time I start a new job, it usually means a new apartment, and there is always a sense of dread as to whether or not it will be clean, stocked, manageable, and perhaps, hopefully, as a bonus: comfortable. I would say I luck out about 60% of the time; the rest of the time I try to simply grin and bear it. However, this time I’ve lucked out – a piano, BBC, lots of light, and (best of all) REAL VIRGIN OLIVE OIL direct from the owner’s B&B in Tuscany! The very first thing I did was to rip open a loaf of crusty bread and tear into that green aromatic heaven!! Just what a tired body and soul needs to get recharged!

I’ve arrived here to begin my very first attempt at the role of Sesto in La Clemenza di Tito. Back in 1995 I first learned the aria “Parto, Parto” for my apprenticeship in Santa Fe. It was an incredibly difficult undertaking at the time, and I know that I was simply trying to stay afloat with it for quite a while. It’s been in my head for over 10 years, (as well as his second aria) and I have been ANXIOUSLY awaiting the chance to actually turn those tiny nuggets of music into a real flesh and blood character. Finally, I’m getting that chance, and it just feels incredible. Is there one single excessive note in this score?

I have been very relieved to see that the production could be truly stunning and incredibly moving, as the director has such a deep and loving approach to these characters and to telling the story simply, yet compellingly, always in accord with the music that Mozart gave us; and the conductor seems to be a superior musician eager to use the music to theatrical effect. (Yannis, the director, began as a set and costume designer, and found himself drawn more and more to opera; his approach to making contemporary audiences engage completely with these ‘old stories’, is to keep a modern look at them, but always in conjunction with the music – I think his approach is completely on the money.) It feels wonderful to walk into a staging and have my ideas of the character be very much on the same page as every other person in the room. It’s not always the case, and I find that it makes me feel much more free to risk and attempt a lot of different options for the character, which I think is essential to fleshing out the details of the dialogue and the character’s sub-text. 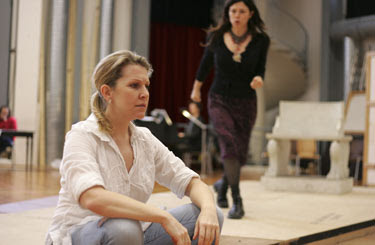 It is a huge help when you’re putting a character on its feet for the first time to have the support of everyone in the rehearsal room; the image of a newborn calf or colt taking it’s first steps is the most perfect illustration for what I feel like in the first days of staging for a new role: I’m incredibly self-conscious of trying things out, of taking emotions too far – or not far enough, of missing lines, or of simply over singing in the excitement. It feels like you’re falling down, over and over! But I do think one of the lessons I’m learning about the rehearsal process (which I love), is that the sooner you can start to risk things, the sooner you’ll find something very real and multi-layered. I simply adore the challenge.

There is no doubt that Clemenza is a masterpiece, and that Sesto is one of the most tortured characters in opera. There is a big discussion as to whether he is weak or not, and I can’t wait to search for the answer. **I think the fact is that he may appear weak in certain situations in the opera, but I’m quite certain that if I approach him as weak, my characterization will fall apart completely. After the first week of rehearsal (and over 10 years of singing his arias), I don’t think he’s weak AT ALL: I think he’s blinded by passion, completely torn between loyalty to the friend and ruler that he loves, and the woman that he loves.** I can’t wait to find out what happens. 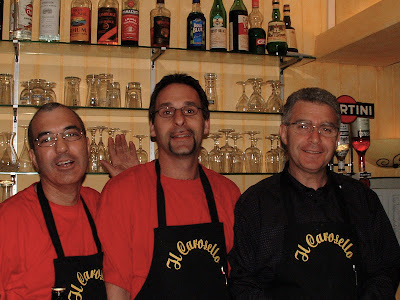 (Photo: the owners of the best pizza shop in Geneva, AND they stay open late — a real rarity in this town!)

If you’ll forgive me, I would like to also say one final thing about Dejanira, and my Hercules experience. It was quite funny, in a way, to sing this role in London so quickly after my appearance there in January as Rosina, in a role and production about as COMPLETELY OPPOSITE as you could possibly find. For me, it wasn’t any kind of special feat to pull off two such different roles, as I love them both and tried to do my best with each of them, but to people who have only seen me in one capacity, i.e. the “perky Rosina”, I could tell there was a bit of confusion on their faces. I’m sorry if it’s confusing, but I have to tell you, it’s deliberate on my part, and I LOVE it. I think there is a very dangerous trend in Opera (as well as in showbusiness, for example), where people are entirely too quick to put people into a tiny little box, and say “this is what X does.” And then before we know it, it’s the gospel truth. I think it’s so wrong. I RELISH singing such varied roles and varied styles of music, and the more I do it, the more convinced I am that the modern pieces I’ve sung INFORM the Rossini that I do, which informs the Mozart I sing, which informs absolutely everything else I do. I feel it makes me a stronger musician, and feeds my artistic curiosity. I don’t know that I sing everything perfectly and totally in the ‘correct’ style, whatever that means, but I DO know it feeds my need to stretch and explore and pursue different experiences. (I just saw Capote last night with the extraordinary Phillip Seymour Hoffman. What a shattering, perfectly crafted portrayal from an actor who CAN absolutely inhabit such a wide variety of characters. What a model of an artist who risks, and categorically refuses to be put into a tiny, repressive box!)

When my management first took me on in 1998, one of the very first things Simon and I talked about was that Rossini would probably be my ticket into a number of theaters. But we were VERY aware of the fact that if we only pursued the Rossini roles, my career would be very limited and short lived. (And that’s not even taking into account my desire and love of performing varied roles and repertoire.) It was a very conscious career decision from the start, and one I’m thrilled to be living. One goal that I have, is that when people come to the theater and see a performance of mine, they will sit down in the seat, take out their opera glasses and say, “I wonder what this is going to be like.” I can absolutely guarantee you that some of the time I’ll hit the bull’s-eye, some of the time I’ll miss the mark by a mile, some of the time it will be to some people’s taste, and other times not – but I’ll always give it everything I have, and in the end, I’m sure every experience will inform my artistic growth. For the time being, I’m in this for the long haul, which means I want every outing on the stage to teach me something and enlighten my development as an artist.

That all sounds very grand and a bit put-on I’ll admit, but it really is how I feel. The bottom line is also that I LOVE inhabiting such a wide range of characters, situations and musical languages. Certainly Dejanira will long be remembered in my mind as a cornerstone of my career in so many ways, and I was very sad to close the show, to say goodbye to all the extraordinary musicians around me, to the beautiful music, and walk away. But here’s the beautiful thing: I’m walking into Mozart’s Clemenza – actually sounds like heaven to me!