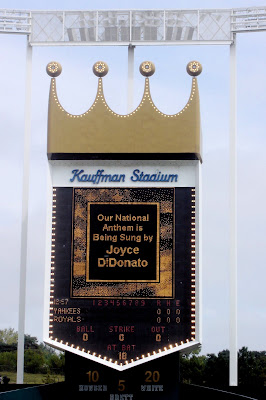 One of my sweetest childhood memories is of my sister and I sitting on our beds, having stealthily stolen the coveted sports page from my older brother, and breathlessly scouring over that morning’s “box scores” where the stats from the previous night’s game are listed. We couldn’t wait to see how many singles Cookie Rojas and Freddie Patek had executed, if Amos Otis was that much closer to another Golden Glove victory that year, if Quisenberry scored another league-leading save, or how close George (Brett, that is, but we felt we could just call him, “George”) was to capturing that elusive .400 batting average. They were the glory days of Ewing Kaufmann, Whitey Herzog, Dennis Leonard, Frank White, and actual WINNING SEASONS! OH, the youthful summertime BLISS! 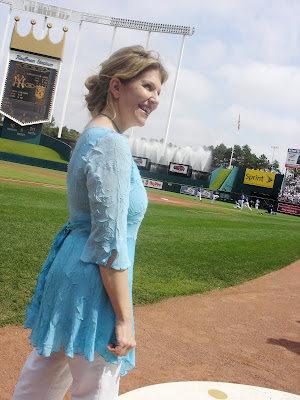 Well, a dream came true for me on Sunday when I was able to ‘take the field’ (no longer the astro-turf of days gone by), and sing the National Anthem for the Kansas City Royals. It was a genuine rush to walk the halls underneath the stadium and see the retired jerseys of the great players who brought us the World Series in 1985, and then to walk up the long corridor to take my place on their field of dreams – distant dreams these days, it would seem, but dreams none the less! You see, my baseball team hasn’t been exactly “competitive” for the past, um, let’s say decade or so. But I’m still a loyal fan, and there is no mistaking the joy of being in that stadium, now dubbed “The K” in tribute to their legendary owner, and feeling the possibility of a win. (Incidently, the Kaufmann foundation, which he and his wife founded, is the main force behind building what will be the WORLD CLASS Performing Arts Center in downtown Kansas City!)

In this case the odds were against us as we were playing the EEI (Evil Empire Incarnate): those dreaded Yankees. (Shudder) The horrid Reggie Jackson, the sinister Craig Nettles, let’s not EVEN talk about Goose Gossage — OH how we loved to HATE them!! I miss those days, I miss being competitve, and I miss being able to brag about how we shut them down in the 9th inning of the play-offs. (But we DID strike out Alex Rodriguez twice on Sunday, so I’ll take!)

What I love so much about baseball, is that it is the ultimate individual sport housed in the ultimate team sport: each player must excel, and each one has his chance to win the game, but it cannot be done without the effort of the 8 other players and the managers. I won’t draw the obvious conclusions of how it parallels what I do (they’re there in abundance), but I still learn mounds of things from watching athletes perform – it’s all there in their eyes – and I relish each chance to take notes. 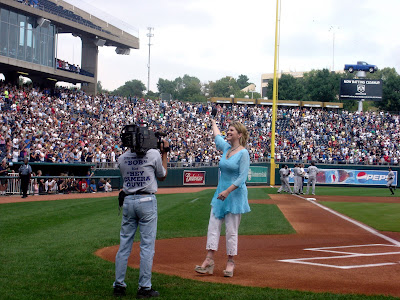 I was so happy to sing my country’s National Anthem for the cheering crowd that day. I thought a great deal about each word I was singing, yearning to feel a sense of pride in my country again, and ultimately was left feeling quite small and humble in light of the sacrifices that my fellow countrymen have made in the name of America. It’s not a small privilege (nor responsibility) to perform that song, and I hope that honor will always accompany it.

*Photos by my wonderful neighbor (and Cubs fan) Carly