I’ve been enjoying my time here in Paris IMMENSELY. For the first time, in probably a good, solid 3 years, I have not been pressed for time in preparing the “next thing”, and boy, have I loved it. Don’t get me wrong – I wouldn’t have given up one new role or project from the past years, but the time had definitely come for me to have a bit of a mental rest. I’ve been singing the role of Idamante for the 3rd time in Luc Bondy’s production, which means there is not much mental energy required on my part (lots of physical and vocal energy, yes – but it’s a bit of a mental vacation since I already know “how it goes”). The performances have also been beautifully spaced, so I have been able to have ACTUAL, REAL-LIVE free days. Aaaaah. It’s taken me a little while to remember what to do with a free day!!! But this is also one of the reasons I’ve been a bit absent from here – I’ve taken “Joyce time”, and not only was the timing perfect, but I think I’ve made the best of it, and will leave Paris in a week feeling rejuvenated, rested, and invigorated. It’s been a real gift.

One off-day was spent with the delightful Eve Ruggieri, taping her fascinating show, “Cinq etoiles” (“Five Stars”) which should air sometime in the near future, and it was a BLAST because I shared the “heavens” with Rolando Villazon and Ludovic Tezier – both fellow recipients of a prize from Placido Domingo’s Operalia competition. We couldn’t help but take LARGE note of the fact that one of the many contributions Placido has made, has been to nurture the careers of so many young singers, not only with prize money, but with actual contracts and references and support. It was a beautiful tribute to have the 3 of us as living proof of his contribution. It was also a big personal accomplishment for me to be able to actually partake in a full evening of French conversation for television. It was EXHAUSTING, and I made a gazillion errors, but I loved the fact that I didn’t actually drown in amongst all those nasal vowels – I stayed afloat, and that was a very cool “chose”.

So, a few pictures to fill in the blanks, and as I emerge in the next few weeks from my mental vacation, I’ll be a bit more in touch! 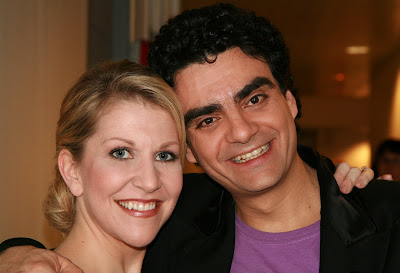 Señor Villazon, who kindly gifted me with a fabulous drawing of “Der Rosenkavalier”, sketched during the playing of the Barbiere Overture – probably the only time those two distant worlds of mine will ever intersect! 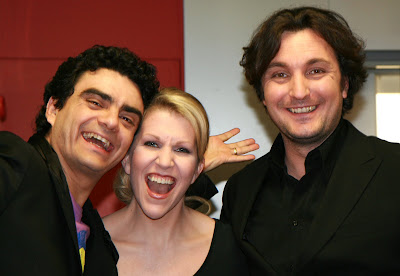 “The longest part of the journey is said to be the passing of the gate.” ~Marcus Terrentius Varro “In Paris they simply stared when I spoke to them in French; I never did succeed in making those idiots understand their language.” ~Mark Twain “There are two ways of spreading light: to be the candle or the mirror that reflects it.” ~Edith Wharton