I remember one of many long, deep conversations with my Dad that started out, most likely, with how the Royal’s pitching staff was doing, and wound its way through religion, faith, life, and the desire to always stay young at heart. This particular conversation found us debating the difference between “happiness” and “contentment”, and how well I remember his saying that the former would come and go at its own pace and in its own time, but the latter was a state of being that could accompany you no matter what the present circumstances – for it implies a deeper, immovable force within you.

Well, personally I’m happy with both states of being, and I’ll gladly take both – I’m greedy, I suppose! But from a professional standpoint, I can say there is a difference between the two: I can be “happy” that I got a contract, that I received a good review, or that the powers that be were pleased with my performance; however, I feel a profound sense of contentment when I know I’ve given everything I have in a particular performance, and that my preparation paved the way for me to be free and express all that I desired for that moment. Sadness can crush at will the sense of happiness, however, when the contract is given to someone else, the review is not exactly glowing, or someone “in authority” expresses indifference to my interpretation. But if I am truly content with myself, truly settled in what I gave, nothing can move me from that place. Perhaps that’s what my Dad was speaking of? 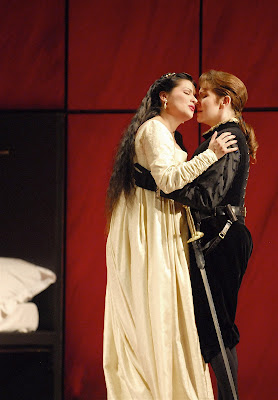 I debuted the role of Roméo in “I Capuleti e i Montecchi” Saturday evening for the Paris Opéra, and I’m happy to say that I left the theater deeply contented. (I was also very happy, but that may have been directly tied to the champagne!)

Now that the premiere is behind me, I’ll be completely forthcoming: I completely and totally underestimated this role. HOW that happened, I’m not sure – but I think one of the reasons is that of my inner circle of “advisors”, for lack of a better word – they’re not official, just my go-to folks – but surprisingly not one of them really knew this opera. (I know – how can I ever again refer to them as my trusted “Opera Queens”?!?!) But somehow, this opera just fell through the cracks, and no one leading up to this event was pumping me up with “You’re going to LOVE this role – but watch out, it’s a really tough one, it’s going to take a lot of work”, as they did non-stop with my first Octavian. Also, in my flipping through the score months ago to gauge how much blood, sweat and tears I would have to invest into these notes and words, I stupidly and naively looked at the “simple” (HA!) Bellini lines and thought, “Oh, this is a snap – a few low notes, lots of high notes, but all manageable, simple melodies, I’m good to go!”, and out of necessity, immediately turned my focus to things like my recital repertoire and my first Handel recording – “the really hard stuff”. Before I knew it, Handel was 1,000 light years behind me, and I was unpacking my luggage in Paris marching to the first day of rehearsal with a cavernous sense of “I’m going to be fired, because I am woefully under-prepared for this role. WHAT WAS I THINKING?”

That was the bad news. The good news was that I am known in this theater, so perhaps they hesitated a bit in actually asking me to “please quickly leave the premises”, and I also knew the conductor and likewise, he knew my normal work ethic. After pleading for patience I threw myself heart and soul into finding this character, and didn’t stop until I was in his skin. Yes, it’s “an easy learn” – because it’s Italian (which thankfully now comes more easily to me) and no, it’s not complicated musically to pick up. But as they say, the devil is in the details, and that is what I relished about diving into this score – the tenuto, the accent, the stretch, the pull, the rests, the silence, the LEGATO – and always always always these tiny markings creating the heartbeat, the pulse, the tears, the desperation, the pleas of this character, Roméo. Even though I never would recommend preparing a role this way, I have to say that perhaps this full-on immersion was exactly the adrenalin and intensity I needed to find his passion and tenacity. 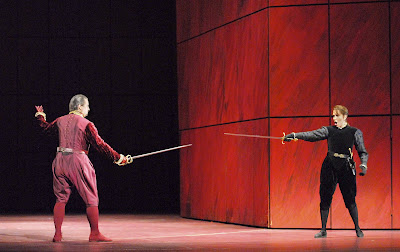 I’m just sorry that I didn’t have a better cast to perform this role with. (Insert sarcastic icon here) I don’t normally like to write too much about my colleagues here – so much can be misconstrued or misinterpreted, and I try to be very respectful of people’s privacy – but I’ll suspend that rule for the moment: Matthew Polenzani sang a beautiful Tebaldo (his role debut, as well) and brought his supreme musicality and rich integrity to the role. As the 2008 recipient of the “Beverly Sills Award” and also a fellow “Tucker Award” winner, I went to him after the curtain call and said, “You know, Matthew, I sure hope that Richard and Beverly are popping open a big bottle of Champagne and toasting us tonight – I think they would be very proud of us down here”, and we both drank in the enormity of how those two American singers helped pave the way for the two of us to stand on that stage in that moment, and how, as winners of the prizes that celebrate their immense contributions, it felt quite magnificent to be “making good” on those votes of confidence given to the two of us over the past few years.

And of course, Anna Netrebko was making her Paris Opéra debut in this role, and she was a dream to share the stage with – from her beautiful singing, to her completely involved performance, to the hidden squeeze of my hand as I sang my final aria to her. She is a most generous colleague who enters onto the stage to tell the story holding nothing back, and I do believe it is one of the reasons she is an anointed star in this opera world – I think the audience feels and responds to her generosity and knowing that she is enjoying every note she sings. 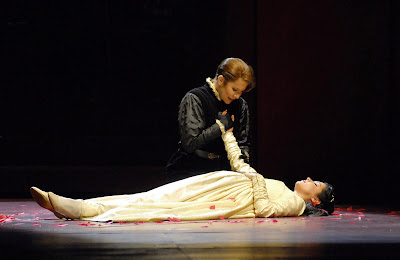 As for me, even though it was a fast and furious journey, and even though I essentially had only one complete run of the role before the opening curtain, I felt ready, I was excited, and I held nothing back. I have never had a role ask so much of me in terms of the vocal range (as this one begs for a lot of “heroic” singing in the middle and low part of the voice), and I think it has been a wonderful thing for me to stretch into. I welcome the chance to find the balance between “experiencing” the emotion myself, and “giving” the emotion to the audience – ah yes, that’s a terribly tricky line to walk in a part like this, but the reward is great. And I cannot wait to sing this part 7 more times. I will be very sad to say goodbye to him for the time being, however, I trust this feeling of contentment will last a very long time.