“Be careful what you wish for…” goes the saying, no? My stay at home last week rushed by me with the force of a full-on Midwestern thunderstorm: powerful, furious and over in a flash. As I was cramming music, laundry and paperwork (taxes filed on time for the first time in YEARS, thank you very much!), I kept saying, “I need two more days! JUST TWO MORE DAYS!” Well, they came – but I sincerely hope at not too steep an expense.

I had arranged to stop over in Geneva on my way to Brussels to work for three days with an exceptional coach quite well-versed in Handel’s language of chromaticism, emotional depth and those fierce fleeting passages; we had a wonderful, immediate rapport during Ariodante and I knew working with him would be invaluable for this project. When I hadn’t heard from him in the days leading up to my departure, I started to worry, and sure enough, at 6:00 am on D-day I received an email with news that in fact, he was quite ill. I send him ALL my positive thoughts to make a full and quick recovery, and ask you to do the same, should you feel so moved. After a few moments to collect my thoughts, a quick phone call to Continental followed, and I was able to change my flight with relatively little expense. Voilà: two more days at home were gifted to me, and I gladly took them.

It was as if immediate relaxation washed through me, and I was allowed to breathe deeply again!!! While I know that I missed out on some wonderful work, (and sincerely hope that missing it won’t affect my performance, for you see, to acquire that final 1-2% of polish on any work is immeasurably important, and I believe is what sets apart the truly great artists. I’ll soon find out, won’t I?), what I gained in being at home without the stress of rushing to accomplish everything under a gloomy, persistent stopwatch is priceless. I was actually able to attend my niece’s 5th birthday party ON her actual birthday. It may not sound like much, but I miss nearly every single birthday, anniversary, graduation, reunion – well, you name it. So to actually be in attendance and take a photo like the following: 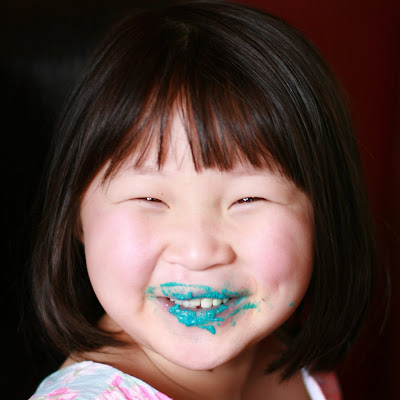 well, it quite simply makes my year! Lest we ever forget the unadulterated JOY that accompanies most 5-year olds on their big day, it’s worth it to revisit it occasionally. When does that kind of pure bliss become “uncool”? Why does the world ever ALLOW that kind of light to be diminished? That’s insanity. Oh, I’m so grateful I got to be there and witness it – I’m still smiling crazy! (And my lips just might still be stained from the blue frosting, as well!!)

I also was able to attend another niece’s big night, as she was a backstage hand for her high school’s production of “Beauty and the Beast”. I was not at all prepared for the high level of excellence – from the great dialects, compelling acting (they each had their physicality down perfectly), and singing in tune without forcing! That thrilled me to no end. Seriously. I was duly impressed. But the thing that really got to me, was watching the chorus members -especially the ones who weren’t fighting to be noticed; my eye kept going to a few that were obviously not ‘stars’ but were singing with their whole heart and soul, as if their very existence depended on it – I could read it a million miles away as if they were backlit with screaming, streaming neon lights. Their eyes were on fire – pure and electric, unapologetic and unashamed; as opposed to a few of the ‘stars’ who knew all the public’s attention was coming to them, who performed as if they deserved such attention – forgetting that applause is something that should be earned. I know they were ‘just’ school kids, but I also know how seriously they take it, and it nearly brought me to tears to see those stand-outs who had obviously caught the bug – it was making their LIFE to be in this production, and they were giving it their ALL without question. It was such a beautiful thing to behold – and it put me right back into high school, singing in the choruses of “Godspell” and “Brigadoon” as if nothing else in the world existed! It was the perfect ‘check-in’ I needed before starting this crazy period of “high-profile/pressure” jobs: I never want to forget why I do this. I never want to forget that it’s not about getting the attention – it’s about doing the work, purely for the sake of doing the work. It’s about the music. And THAT is where the fire comes from – THAT is what lights the eye and ignites the heart. I saw it in their 16 and 17 year-old eyes: eyes that haven’t lived half of what they THINK they have lived, and yet eyes that point the way to abandon – just like my 5 year-old niece’s blue lips! I love being taught by unexpected experts!

The extra days also afforded me the time to stop and smell the roses, or the blossoms in this case: 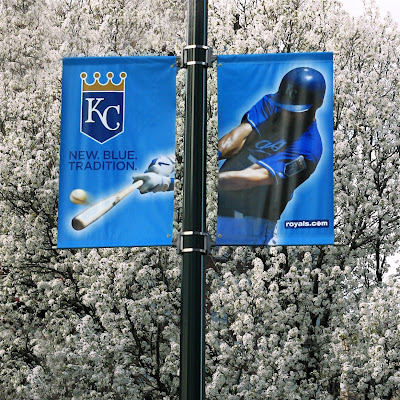 Not only the blossoms of all the pear trees bursting into bloom across town, but the blossom of the ROYALS boasting the bragging rights to things like: “The best bullpen in the Major Leagues”. What? Yes – that’s right. My Boys in Blue are having a great April. I’m in Heaven.

But it’s also back to work. Yesterday I had the first rehearsal with Christophe Rousset and his orchestra, Les Talens Lyriques. It’s really happening! This recording project which has been in the pipeline for some time now is finally blossoming in honor of the long-anticipated Spring. It’s always a strange day, that first encounter with a new orchestra. I don’t know anyone in the group (aside from one bassoon player), and have only met Christophe once for a quick discussion of the disc. I find it startling to have to try and emit such intimate, wide-ranging emotion in front of a group of total strangers – but that is where music comes in. It unifies, not separates. It allows, not prohibits. It encourages, not discourages. I still found the group a bit quiet – but I also found them quite serious about the music, and this is a good sign. We’re spending a lot of time together in the coming months, so I anticipate a wonderful relationship.

Hopefully I’ll manage to report often on our progress – as I did during the “Alcina” project. This, however, is a very different format: we record two concerts live, with a few patching sessions. I have no idea of what to expect, for having a live audience will surely CHARGE the performance, but I also know that I never give a perfect, ‘recording-ready’ performance (…I get lost, I say all the wrong words, sing the wrong cadenzas – I get carried away, let’s say…) I suppose that’s why we have the patching. But I fully anticipate a palpable energy from the audience to lift me up and hope that translates brilliantly onto the disc. 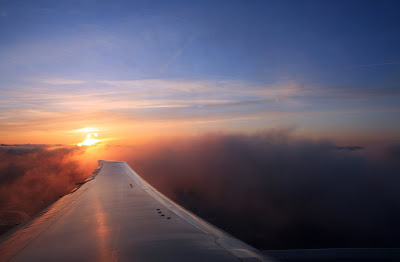 So I’ve landed safely here in Brussels (where’s my chocolate?), ornaments are in place, characters are bubbling up, this Handel project is ready to be born! Let the fury begin!!