It is a TERRIBLY foolish thing to rave about a show before the opening, and certainly what happens in the dress rehearsal is not necessarily an indicator of how the opening night will go, much less the run, so I must choose my words carefully. Perhaps I shall just talk about the rehearsal process? Yes, that seems prudent. 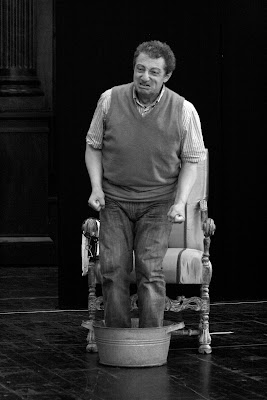 I have enjoyed my 3 weeks of rehearsals here in London more than I can say. I don’t know that it’s possible to work at a much higher level than this – although anything, naturally, is possible. I’ve spoken here about how much I relish the rehearsal process, because for me it contains the possibility of real discovery and an undeniable period of growth as an artist. Sadly, that doesn’t always happen, and I often walk home from the theater thinking we are somehow selling the opera short by not digging as deeply as we could, and by not holding ourselves to a higher standard.

Well in this particular, miraculous case, the standards are as high as they come. We have Maestro Tony Pappano in the orchestra pit bringing to life this masterpiece for the first time in his career. I’ve never sung an opera with him before (only concerts) and I am sure he is as animated as this every time he raises the baton, however, I do sense a particular spark in his eye as he realizes how absurdly fun it is to play this piece. He finds the musical jokes in the piece, revels in the vocal acrobats happening around him, and takes every single, solitary note of this score seriously. It doesn’t get better than that. 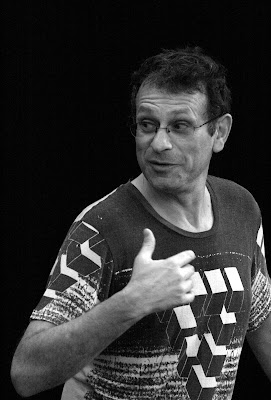 (Moshe Leiser takes us through our dramatic paces)

We have a production team that is unsurpassed. They are the ones who beg us to serve both “gods of opera: the god of theater and the god of music”, and to accomplish that they actually KNOW the music and USE the music and KNOW the play and USE the play. Not one false note is allowed from anyone, and as a result we are playing this for all it is worth. Minute degrees of detail are insisted upon (“Joyce, you’re thinking too much about Bartolo in this moment so it’s coming across too angry, and we need to see the corner of your mouth lift up so we know you’re thinking about Lindoro here.”) It doesn’t get much better than that. 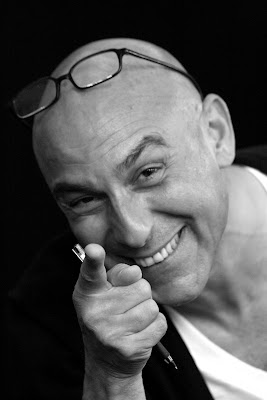 I could write for 10 pages about my costume, alone, and the amazing designs of Agostino Cavalca (above). He sat in the rehearsals (during the first run of the show a few seasons ago) to observe how I moved, and literally built a costume around my movements so that the costume illuminated a part of the character. Not to mention the brilliant fit and cut and COLORS, and the use of roses in practically every stitch (the petticoats resemble an actual rose when gathered up!)- it DEFINITELY doesn’t get much better than that!

What am I missing? There is something else about this show…. Oh. Right. The cast. 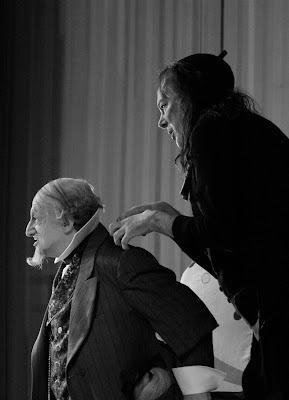 (Alessandro Corbelli as Don Bartolo and Ferruccio Furlanetto as Don Basilio in a moment that surely will go down in the history of the Royal Opera House as one of the ALL TIME GREATEST MOMENTS on the opera stage.)

I have to say that from day one of my career, I have always felt incredibly privileged to be in the presence of greatness and to not just see the finished product of that greatness, but to actually see the PROCESS. I’m a firm believer that greatness is achieved in the process, in the journey – not just in the ovation. (My first example of that was in my first season in the Houston Grand Opera Studio – my first production was “Salome” with the astonishing Hildegard Behrens pouring her way through the score as if it was her first time. What an example to start with!) 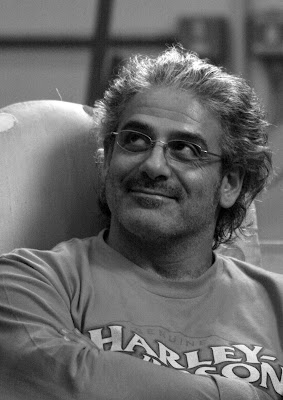 I have had the immense pleasure of watching these four veteran players all work to shed previous accounts of these roles, to ask questions of the situations they had not asked before, and to forge a real “company” to give the impression that we are actually inside the Beaumarchais play, not inside “an opera”. Rest assured, to say the singing is first rate is the understatement of the year, but the singing SERVES the drama and the drama REQUIRES the singing to happen. Ah, it’s bliss, I tell you – sheer bliss!!!

My philosophy along the way has always been that, in essence, I don’t want people to be aware that I’m singing. I want it to seem like the most organic, natural act that simply HAS to happen because the emotion dictates it. I don’t want the singing to interfere with the drama, and I don’t want the drama to interfere with the singing. I want it all to be seamless and absolutely united. I’ve often wondered if it REALLY was possible, and I can say that in my experience in these rehearsals, it absolutely IS possible. And God, when it works, it feels SO good. Yeah, it definitely doesn’t get much better than that! 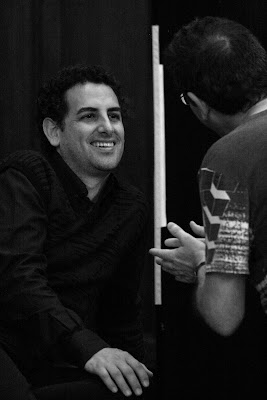 (Juan Diego Florez speaks with our director, Moshe Leiser, about the finer points of the drunken soldier)

So wish us luck for the opening that we can continue the journey and bring a splendid Barber to Londontown. (And for those of you in UK – watch your local listings on July 15, as we’ll be beamed direct to parks and squares across the UK – the biggest one being at Trafalgar Square!)