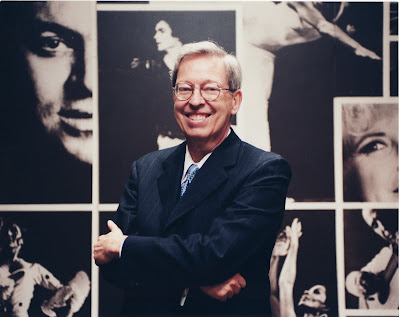 Kansas City lost one of its greatest visionaries the same day that the world lost Sir Charles Mackerras. While perhaps the latter will receive more international coverage, the loss of Richard Harriman will be no less deeply felt. He brought the world of classical music to the middle of America and provided a varied, superlative, world-class program that saw the recital debut of Luciano Pavarotti, countless appearances by Marilyn Horne, the Vienna Philharmonic, Russian Ballet companies, Baroque Orchestras, Wynton Marsallis, among a multitude of others, and graciously gave me my hometown recital debut.

He was a quiet, unassuming man who championed countless performers and somehow knew who the stars would be before any of them knew themselves. He personified the “young at heart” approach to living, and I’m convinced that music provided him the catalyst for that youthful energy. He was an example of serving a community, fulfilling a vocation, and thinking WAY outside the box!

In him, we have the perfect example of what dedication and imagination can bring to the world: in bringing more than 850 events to one city over the years, a single human being with a vision and the fortitude to follow it through, well, he changed the lives of the people of my hometown. He brought us beauty and introspection and laid the world at our feet. No need for passports and airfare – he graciously brought it all to us.

I owe Mr. Harriman a tremendous amount, and he will be sorely missed. What a great thought, however, to imagine he and Sir Charles getting to chat it up together over a nice cup of tea. How much richer those two gentlemen left the world.