Where to begin? What a start to the new year! I have just commenced recording one of the greatest operas ever written, historic in its impact on the musical world of its day, and rather unsettling in modern times for its emotional scope as, once again, Handel seems able to crawl into the marrow of his characters and create such strong, frail, vulnerable and both painfully and jubilantly human roles. 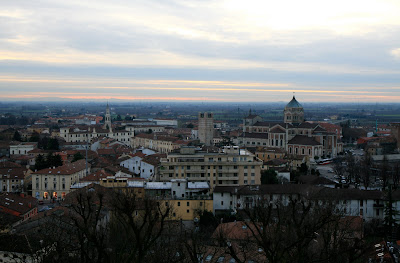 First of all, we find ourselves in quiet, sleepy Lonigo for the recording, tucked away up on the hill in an old monastery, veiled by an almost retreat-like quality which I’m finding very conducive for the concentration needed for this role. The orchestra and (amazing!) soloists eat, sleep and dream here all together which breeds a wonderful atmosphere for unity and a singularity of purpose. This intensity is a good thing.

Lunch is at 1:00 and dinner at 8:00 (provided we’ve gotten all the right notes down in the daily recording session) and both sittings include the obligatory pasta as a first course, and some sort of meat with potatoes for the second. Imagine that – pasta AND potatoes for each course! I’m in carb heaven, and hope my waistline survives intact by the end of the week! But trust me, these arias take a lot of energy, so let’s just agree that I’m actually burning it all off, shall we?!?!

I can’t begin to express how fortunate I feel to be given the opportunity to record this music, but to say that it is daunting is a merciless understatement. I don’t need to list for you all the iconic recordings/performances of this role that have come before me. Talk about intimidating! But as a general rule, I’ve tried most consciously never to compete with the beautiful voices that have sung the same notes and words as me before – I can’t imagine anything more futile than trying to “one-up” a great artist or historic reading of a role. That’s insanity. The best part of Handel is that his characters are so HUMAN and therefore, I hope, can stand up to many different interpretations. Do I hope mine will be an interesting addition to the catalogue of brilliant Ariodantes? Absolutely – otherwise I wouldn’t dare to open my mouth, but I’m trying very hard in this week not to be tied to voices from the past and the fear of “measuring up”.

This probably held true for today’s aria more than any other: “Dopo Notte”. Talk about a minefield of memories, notes, endless phrases and harmful assumptions!!

In speaking with Alan Curtis, the conductor and vision behind “Il complesso barocco”, I knew that he would adamantly uphold the tempo marking Handel clearly gives to this piece: Andante. But I like to sing it Allegro – for some reason, the coloratura is much easier at a quicker tempo for me. Besides, every recording I’ve heard of it takes at least an Allegro approach. Isn’t it what people expect? How to reconcile this?

Well, one thing that has always disturbed me about this approach is that Ariodante has just emerged from the true depths of despair. (Has hitting rock bottom ever been better illustrated than by Handel in the 2nd act?) And yet there is further to go: in the 3rd act, he realizes that HE is the betrayer and must now shoulder all the guilt that he tried without mercy to transfer to Ginevra (but more on that later…) How in the world can he go from the cavernous blackness of “Cieca notte” to unadulterated joy a few pages later? In fact, Handel gives him 2 very long beginning notes to find his footing (or voicing?) as he speaks about the night after the storm – he doesn’t ask Ariodante to explode into a frenzy of ecstatic coloratura right from the start. It’s slow brewing and pensive in a way. Ariodante can FEEL the pain he has endured, and is looking for a way back into the joy he had before his fall. I’m convinced he needs time to bring himself back. He needs a resurrection.

I felt strongly that I wanted to make the first part of the aria a bit of a struggle for him to articulate – the syncopation being about the battle to get back to the rapture he once knew, rather than immediate elation. But once he sings in the “B” section about what he has endured, and he truly realizes he has returned from the fire, he can than authentically own the joy of the sun returning. He has become a man. Now he can dance!

Maybe that’s a bunch of psychological crap, but I’m afraid it’s what Handel brings out in me!!! I’m hoping that Alan and I found the way with our tempi and temperament to make it a piece that contains the inner struggle that allowed Ariodante to overcome his despair: joy is very different when you have been through the fire.

On a lovely note, Mother Nature cooperated wonderfully and gave Lonigo the most beautiful dusting of snow in the afternoon – so I could actually imagine a “Dopo Notte” after the snow! 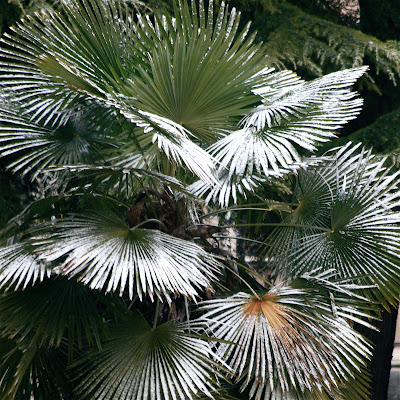 Snow on palm trees – is there anything more beautiful!

Yesterday was the first day of recording, and we did two of the duets between Ariodante and Ginevra. Why, oh WHY are triplets so bloody difficult to sing? You’d think 16th-notes would be so much more brutal, but no – triplets seem to work in only one tempo for the voice, no mercy! Oh, they are evil little buggers!! (Side note – I love those old vocalise books of Rossini, Marchesa, etc – and I’ll be darned if they don’t have buckets full of triplet exercises! Seems like they’ve always given singers nightmares!) But we had a very good take of the final duet, and again – maybe I’m crazy, but I think Handel is just off-the-charts genius: considering all that the two lovers have been through, perhaps “normal” 16th-note runs would have been too easy. Perhaps he liked that it would require a bit of a struggle to come back together, considering they are now both very different people! Perhaps I’m over-thinking it…!

We’re off to a great start here and are working very hard to bring this opera to vivid life for ya’ll! Sadly, you’ll have to wait quite a while (these things aren’t exact, but most likely into 2011!), but hopefully the work we’re doing will be worth it!