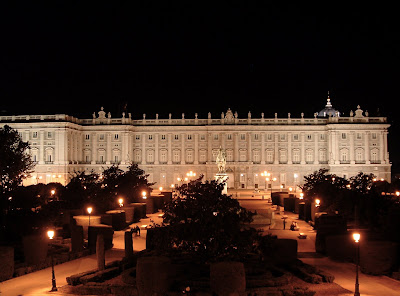 (The magnificent Royal Palace in Madrid)

I apologize ahead of time for what may be an incoherent rambling (and in all probability, highly politicized) edition of my journal; perhaps no more disjointed than usual, but certainly if you tend towards seasickness, grab a life jacket and hold on! You have been warned.

I feel as if my head is swimming with so many ideas, thoughts, conflicts and wonderings, that I will simply start the process of free association and let’s see where we end up.

Today I did two interviews for local Spanish magazines. I was excited, for as I may have mentioned previously, I’ve fallen in love with Spain, and to contribute to the music scene here has been a joy. However, I got a bit worried when the first thing out of the journalist’s mouth was, “Why do you have such a horrible photo in the program here? It’s (and I’m quoting here) “a HORROR”. (Only you must imagine that with the Spanish accent it takes on an even MORE degrading and appalling tone, mind you, as if I have somehow offended every god in the black and white photo universe! I mean REALLY, how COULD I?) Politely defending myself and the gazillions of dollars I spent on that “horror”, we quickly moved on to the business at hand. However, it does bring up in my mind how open we singers are to a constant barrage of criticism, unsolicited opinion, and constant comparison. I’m not complaining, because I do believe it’s part of the job description we accept when going into this business; but I do believe it is a real challenge to keep a healthy perspective day in and day out, as every comment and censure hurled in our direction we must sort and sift through to see if there is a grain of truth buried in it, and then simply discard the rest as if we hadn’t heard the assault, when in fact, we have heard it loud and clear. Ah, I love a good challenge!

Berlin. What can I possibly say about this? When I heard the news that the Berlin Opera was canceling a production of “Idomeneo” because there had been terrorist’s threats against the theater should it go on, my first reaction was “GOOD! That director is a sham and a disgrace to the art form, and his shows shouldn’t ever make it in front of the paying public”. (The controversial part was Idomeneo, the King, coming on shore at the end of the piece with the severed heads of, now let me get this straight: Neptune, Jesus Christ, Buddha, and the starring protagonist in this uproar, Muhammad. Hmm. I’m preparing Idomeneo right now, and in scouring the score can’t seem to find a single reference to this particular stage action. BUT, then again, I don’t know the production in question and cannot justly condemn it strictly on hearsay and the absurdity of such a ‘concept’. How this crap gets in front of the public, I cannot comprehend. I say, if the director himself had actually written a play about such characters, then FINE, BEAUTIFUL, and MORE POWER TO YOU, but it simply and unquestionably is NOT “Idomeneo”. But I’m not the boss.

However, after a petite pause, I became sincerely startled at my gut reaction. If a threat from an outside group can stop the voice of an artist, inducing comprehensive censuring by the theater meant to uphold and promote ‘art’, even art so highly offensive, where will the censuring stop? To whom will we have to answer? What in the world has happened to our civilization that we so easily will crumble against what we believe to be fundamental? How will we ever find our way out of this jumbled mess? The world needs now, more than ever, people of courage to stand up and say, ‘this is not acceptable’, and it won’t come from political leaders or media egomaniacs: it must come from ordinary people, from artists not afraid to shed light on our collective failings, from the public who will strive to tolerate different ideas put in front of them to gain a shred of understanding, and from people of all different persuasions to simply let the others BE. 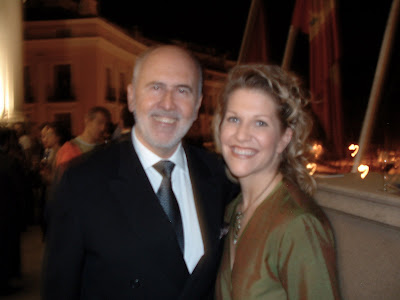 (A bright spot, with the charming Maestro Jesus Lopez Cobos)

Oh, I know I’m not alone in the confusion and the bewilderment of our times. I know I’m not the only one looking into the sky with such uncertainty, (bordering on despair) about the tenuous state of our civilization. I stand in union with people that are fed up by every misfired, misguided, and misled action of those people that are ‘leading us’. But now, it has hit quite close to home, and perhaps there will be a time when I have to either stand up for what I believe in, or fall into line with the rest of the people who are living in fear.

Would I go on if the theater I was performing in were threatened? Would I stand up for something controversial, simply in the name of artistic freedom of expression, not to mention freedom of speech? These are questions I need to ask myself. Did they do the right thing in Germany? I don’t think so. But in the context of the world today, what would anyone else have done? What would I have done?

I know! I would have stood out in front of the theater and sang the Composer’s aria from “Ariadne”!!! How’s that for a segue? Why yes, I just happened to debut in that role this week. I confess that I am no longer a Strauss Virgin. There is no turning back. I’m addicted. I love it. I find it staggeringly beautiful and deeply moving, and firmly believe that more people need to behave like this man: innocently, passionately, afraid of nothing.

Well, perhaps I’m a BIT caught up in the drama of it all, but truth be told, I don’t know very many people with his courage and conviction and openness to life. It’s incredibly refreshing, and it is a TRUE pleasure to sing. I certainly wouldn’t have predicted I’d feel quite THIS enthusiastic about him (despite other singer’s warnings!), but here I am – completely taken. The opening went quite well, and while it’s still a bit scary to swim over Strauss’s orchestral writing without the dependable, familiar Rossinian patterns I’m accustomed to, (and without a life jacket), it was an unabashed joy. 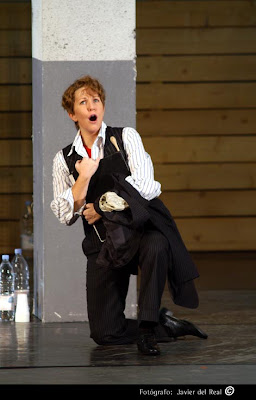 A gift really is laid at the feet of any singer who gets to sing the anthem of the Composer at the end of the prologue, to sing that “music is the holiest of arts, one which encompasses all that words cannot express, and all that humans can be”. If I can add my voice to his music today, in the midst of all this chaos and turmoil, I will gladly take those inappropriate comments here and there, and march out onto stage to sing at the top of my lungs, hoping that some sort of understanding can be born out of it.

In the meantime, as I see it, life is beautiful, and I continue to enjoy Madrid. We’ve taken in a real bullfight (and will go again this weekend…I walked into that ring, saw the strapping Torero’s and immediately understood Carmen. No question.) The food continues to delight, the people continue to shine and aside from a few purse-snatchings for the cast, we are having a grand time together. The beautiful colleagues and staff here make this theater one of my very favorites to work in. I’m keeping busy on other things as well, working away at Octavian, Idamante and Sesto (when do I get to be in a skirt again?), trying to juggle the schedule for the coming years, anticipating what will be the best and most interesting choices to make. I’m handling the heartbreak of missing out on a role that I would kill to do in a particular theater, which for one reason or another won’t be in the cards for me – again, we have to walk the tightrope of heartbreak very carefully in this business! And on top of all that, I’m getting to catch up on reading and museum hopping – things that have sadly had to be on the back burner the past few months. All in all, it’s a rejuvenating period full of joy and chaos.

Welcome to life, I suppose.

Wait! Better get my life jacket!